I'm not entirely comfortable with the outcome of this....


1) Copy this list into your site, including the instructions!
2) Bold all of the sweets you've eaten--or make them a different type color.
3) Cross out any of them that you'd never ever eat.
4) Consider anything that is not bold or crossed out your "To Do" List.
5) Optional: Post a comment here linking to your results--or just post a comment letting us know how many you've tried, or what you're going to try next!

I've also added a + for each thing I have baked (cooked, whatever...)

Today's cooking challenge:
I wanted to create something with the beets and sweet potatoes, because I thought it would be tasty and seasonal and also really, really spectacular-looking. I was thinking of something that interleaved slices of beet and potato - that would look great, right? And they would taste right together - kind of earthy? (I had this thought originally when I was pulling some roasted beets out of the oven, and of course they smell like delicious, juicy dirt. Which sweet potatoes kind of do to, right? Well, to me they do.

Anyway, I think I will do something like this, which I have made before to delicious results and for which I have all the vegetables, even yellow peppers already sliced! Go me! Maybe I'll take a picture.

EDITED TO ADD: Well, okay, no picture, and no new recipe. I "created" something with beets and sweet potatoes only to the extent that I added beets to a sweet potato recipe, and it was sufficiently foolproof to survive. Presenting it composed rather than tossed didn't add much pizazz either. Knife skills might have made a difference...anyway, tasted fine, looked fine, healthy, fine....I just wonder what would have really made it sing.
Posted by betsy at 9:58 AM No comments:

And then they all turned into fish and swam away.*

I just had a completely surreal experience.

As I mentioned, I've had a cold for a couple of days; last night, it migrated from head to chest. This, of course, FEELS like a huge relief, being so much more pleasant less vile than dizziness, drippy nose, itching on the insides of one's eyeballs. But it does mean I actually have to work on getting better. Chest colds, for me, do not always go away by themselves.

So I left work early and came home to sleep. Husband and son came home a while later - the timeline is rather fuzzy for this whole day - and darling Ian stood by my bedside, stroking my cheek gently and saying "Momma? Are you not feeling so well?" He and his friend Heather had made me a get-well card, tracing some plastic bugs with markers on a shirt cardboard. "We Hope Your Bug Goes Away."

So moved was I with tender affection (and so addled from a low-grade fever) that, when Husband tried to remove Child from my bedside, I must have stopped him. "Oh, no, honey," I must have said," I'll take him for a while. You go relax."

And then I fell asleep.

And then I woke up - was it 3 minutes later? A half-hour? Longer? I truly have no idea - I kind of blacked out.

And you know how occasionally, when you fall asleep in the daytime, you wake up not knowing...anything? What day it is, or what part of the day, or why you're in this room, or if you're supposed to be somewhere? All I know is, I woke up, tangled in dampish covers, lying on my side, with a child hopping back and forth over me. I didn't recognize him.

I could not imagine how I had fallen asleep in my calm, ordered life and woken up in someone else's, being tortured by someone else's preschooler.

Plus, he was talking, telling me a story of some sort, in a conversational tone that indicated that we'd been doing this for a while already.

He lay down on his side, facing me, and gazed into my eyes. Oh, right, I thought. Ian. He's mine. That's right.

"Daddy.." I bleated pathetically. Ian took over summoning Husband, who was mortified. Turns out that he had stepped downstairs for just a second, intending to come right back and collect the kid, but sat down and...blacked out.

*This is the way all my dreams used to end.
**On an episode of Go, Diego, Go!, a show of which I mildly disapprove,[1] Alicia needed a rescue boat to come out to an iceflow and get some sick penguins. The penguins indicted they were sick by giving the tiniest, more ridiculously fakey penguin coughs imaginable. A delicate, milquetoasty penguin cough. I found this to be freakin' hysterical, and so occasionally we daintily cover our mouths with our wings and make a tasteful little penguin cough.

[1] It's not that I mind Diego that much. I just think he's horning in on Dora's gig. Respect, people. (Besides, it's not just the pengion cough - I think all the amateurish fake animal noises are ridiculous.)
Posted by betsy at 4:00 PM 1 comment: 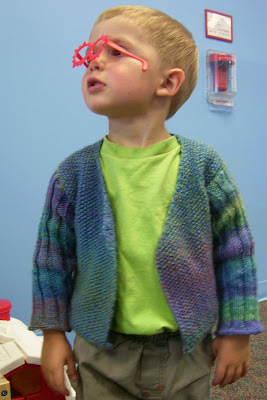 my most recent knitting project my next knitting project
Posted by betsy at 8:54 PM 1 comment:

1. I am the biggest baby on the earth. I have a head cold - A HEAD COLD!! - and I have been laying about whining non-stop for two full days.

2. My banana bread did a television appearance this morning.

Eric did a news segment on Channel 9. He's done a couple of these over the past year - they get a gang of financial experts together and have them field questions from a phone bank and a studio audience, and do a short interview with the anchors as well.

Eric brings along some baked goods to the TV station, to show appreciation for the crew. Okay, yes, and suck up - in a tasteful way, of course! - so that he'll get asked back. It has not appeared to have any effect at all on the frequency of bookings. He does a really good job - truly, he is in his element answering questions on the hoof.

BUT as we watched the last moments of the morning news show (well, when I say 'we', I must admit that Ian was not as interested as I was:

me: Oh look! Look at the that! Who's that on the TV?
Ian: NOOOOOOOOOOOOO! I WANT ICE CREAM! I WANT TO WATCH WUBBSY!
me: Daddy's on TV. Isn't that exciting?
Ian: AAAAAAAAAAAAGHHHHHHHHHHH. I hate you. (1-second pause.) Hug me.

I looked up from my son's downy head to see a full-screen shot of my walnut banana bread. It's what the station ran under the closing theme music.

So I thought about posting my banana bread recipe, or maybe the details of the vitamin C pasta dish I cooked myself for lunch. But instead I will save both those (the pasta dish needs more work anyway.) And tell you the banana tip. The tip that makes last-minute, tv-worthy banana bread possible.

When the bananas in the basket on your kitchen table start to look a little soft - not, like, fuzzy or anything, but more brown than yellow and more soft than sturdy - you can freeze them. Don't cut them or peel them, just throw them into the freezer. The peels will immediately turn completely black. Don't let that scare you.

They won't get any riper in the freezer, but they'll be really soft and sticky when the warm up; perfect for baked goods or a smoothie, anything where they're smooshed up). When you're ready to use them, take some out and let them thaw on the counter. They'll grow a layer of frost over their black peels, which will make them look completely rotten. Ignore that. You can break them into pieces to help them warm up faster. Leave them alone for about 10 minutes, then slit the peel with a butter knife and slip if off with your thumbs.

That's it! You'll want to warm them up a little longer if you're mashing them by hand, but you can mash them mechanically while they're still frozen.
Posted by betsy at 9:49 PM 1 comment:

I do not actually care for walking.

I like it as a mode of transportation, but as a form of exercise, it's kind of a drag. But I do like observing, and talking to myself. (Silently. In my head.)

Okay, let's pause for a moment and see if we can imagine a non-creepy way to peep in windows.)
First of all, IT'S FROM THE SIDEWALK. It's not like I'm taking a ladder around with me, like Bluto at the sorority house.
Posted by betsy at 9:50 PM No comments:

some of the things
that the people
who live withing a mile of my house
were doing
between 6 and 7
on a Sunday evening.

grilling (1)
working on cars (2)
letting the dogs out (6)
standing in the front yard in bathrobes (1)
tying a mattress and box spring to the top of a compact car (2 men, one bedding set)
leaning in car windows to flirt (2)
making music (1 boy, front porch, harmonica; 1 person, converted garage, drum kit)
placing halloween decorations (2)
transporting crying infant from car to house (1)
shouting at brother on playground (1)
hiding behind porch to jump out and scare big sister (1)
Posted by betsy at 8:53 PM No comments: