for the new year

unwrap our darkness from jonny baker on Vimeo.

Curried Potatoes and Peas - this is tasty but a little spicy for me. Perhaps I was a little casual with the doubling of the spices. I used waxy potatoes - I think fluffier ones might have thrown off some starch and thickened the gravy. Still, popular and nice for a snowy evening and a worthy basis for further refinements.

Combine: 16 ounces fresh cranberries (that's one bag plus some) rinsed and picked over; 2 cups sugar; 1/2 cup fresh orange juice; 1 tablespoon orange zest; and a tablespoon of fresh grated ginger. Put all that in a sauce pan, and heat over medium heat until the berries pop open, about 10 minutes. Skim the foam off the surface with a spoon and discard. Cool to room temperature. Refrigerate, covered, up to 3 months. Apparently, you can freeze it too, though we have never tried that.

This is an adaptation of a Sheila Lukins recipe from Parade. It's really hard to screw up.

We buy cranberries when they're cheap and keep them in the freezer.

HOW DID IT GET TO BE DECEMBER?
HOLY LORD!

We are playing are annual Christmas game - no, not "Replace the Sound Operator for the Christmas Eve Service which is in SEVEN DAYS OH MY LOVING GOD HELP ME" - but instead, "Who Would You Cast in Miracle on 34th Street if you were making it This Year?" I always try to work in serious method actors like Daniel Day Lewis and John C. Reilly.

Every year, I suggest making the Shelhammers a male couple. Those refined, well-dressed men with their bow ties and hats, who speak so precisely and work in retail management - it's not much of a stretch. So I'm forever trying to figure out what man should stand in for Mrs. Shelhammer - you know, the lady whose husband has plied her with triple-strength martinis to get her to consent to have Santa move in? It's my favorite part. This year, I am stumping for Steve Carrell as Mr. Shelhammer who works at Macy's. I haven't decided who the other Mr. Shelhammer should be.

As for me, I am a writing fool and a knitting fool, and tomorrow I will be a cooking fool as well. Oh - and a Cricut-ing fool, too, like last year. We (I) cut paper shapes, and people use them to make ornaments for the sanctuary Christmas trees. (Plus I cut a bunch of stars and snowflakes for our house.)

Last weekend, Ian seemed to have made HUGE leaps forward in terms of being not merely obedient but actually agreeable. This week, in response to all our praise and irrational exhuberance, he has made Barishnokov-worthy leaps in the other direction.

It's the most wonderful time of the year.
Posted by betsy at 10:18 PM 1 comment:

Some companies actually could benefit from random drug testing. 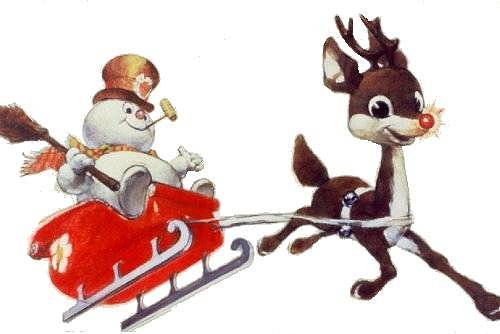 Ian and I sat around in our pajamas all day watching TV (we're resting up for a party tonight.) (Ian is currently resting by smashing his forehead into my shoulder. Excuse typos.)

Anyway. ABC Family (which retains a decided lead in the wtf race, since just about every program, promo and even sponsor I see on the channel makes me say "WTF is your programming philosophy, mission statement, target demographic...i just totally don't get it." ) was running a slew of Rankin-Bass stop-motion Christmas specials, including Nestor the Christmas Donkey, Rudolph's Shiny New Year, and the bizarrely fascinating Rudolph and Frosty's Christmas in July.

Here is Wikipedia's plot synopsis. (You may be wondering if this is one of those instances when Wikipedia was pranked, like the person wrote that Senator Ted Stevens was 108 years old, or the Wonderpets! entry that is all about your mamma. Because that couldn't actually be the narrative of a children's program right? RIGHT? Maybe a Dickens novel (specifically Bleak House) or perhaps an unproducer Lars Von Trier screenplay.

Long time ago, the evil wizard king Winterbolt has caused havoc upon the people who have entered his domain. He is then punished by Lady Boreal when she places a spell that puts him in a deep sleep.

Years later, Winterbolt is awake. In her final act of magic, Boreal transfers the last of her power into Rudolph's red nose, which will stop glowing if it is ever used for evil. Winterbolt learns of this and plans not only to dispose of Rudolph, the only power capable of stopping him, but also to reclaim his territory from Santa Claus. To achieve this, Winterbolt plans to take advantage of Frosty and his family. At the same time, Rudolph's ice cream man friend Milton arrives and tells Rudolph and Frosty that he plans to attract the heart of Milton's girlfriend, the high-wire act Laine Loraine.

Winterbolt offers Frosty magic amulets that will keep his family from melting and enable them to attend a Fourth of July Circus in which Rudolph is to star, but they will only be protected until the end of the event. Santa agrees to pick up Frosty and his wife Crystal before the magic wears off, but Winterbolt has his ice dragons blow up a blizzard to prevent Santa from arriving on time. Winterbolt also recruits an evil, unintelligent reindeer named Scratcher to try to get Rudolph to turn, or at least appear evil in the eyes of his friends. With the blizzard keeping Santa from getting to them, time was not on the side of Frosty and family. When Scratcher arrives, he forms an alliance with Sam Spangles during the parade.

Scratcher, taking advantage of Rudolph's kindness, steals money from the circus and sets up Rudolph to take the blame. Rudolph agrees to appear guilty after making a deal with Winterbolt, to extend the powers of the amulets Frosty's family wears for an infinite time in exchange. Frosty's family, friends, and the circus' owner and Laine's mother, Lilly Loraine, are upset when Rudolph lies to them about how he stole the money and his nose stops glowing. Only Frosty knows the truth and wants to restore Rudolph's glowing nose. Winterbolt takes advantage of Frosty as well by lying and agreeing to do it in exchange for Frosty's hat, with intention to use the magic powers of Frosty's hat to create an army of snowmen. Rudolph manages to steal back the hat, and his nose regains its glow.

After Rudolph returns to the circus with Frosty's hat, Winterbolt attacks which ends with him turning into a tree when Lilly throws her iron guns onto his scepter destroying it. Once Winterbolt is vanquished, Scratcher has not been seen again, and Sam is arrested, all the spells he has cast are negated and Frosty and his family are in danger of melting once again. However, Jack Frost, the villain from the previous Frosty's Winter Wonderland (but in the "animagic" form from another Rankin-Bass special called Jack Frost), arrives on Big Ben, who's Rudolph's whale friend from the previous Rudolph's Shiny New Year, to rescue his former enemy and family as they are whisked back to the North Pole by Santa, but Rudolph stays behind to help the circus out of debt. The special ends with a rendition of "Rudolph the Red-Nosed Reindeer", sung by the entire cast.

Well! How was it, trying to follow that? That was a summary. The author chose not to mention that:

2. Winterbolt the wizard learns of Rudolph's magic powers by talking to an ICE GENII, which is a mountain of ice with stelagtite teeth and glowing eyes.

3. Along with his fierce and deadly TWO-HEADED ICE DRAGON, which moves in slow motion (watching it brought to mind the earlier stop-motion animation in films like 7th Voyage of Sinbad) 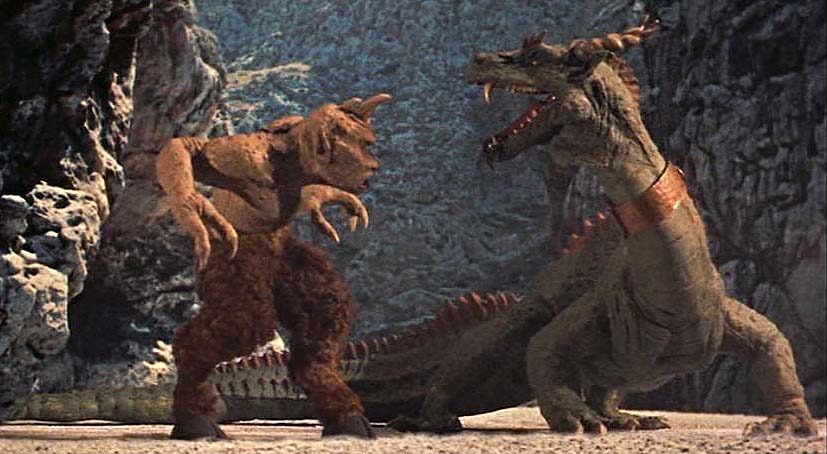 some villianous personage (I assume the wizard, I was a little addled by this time) has at his command GIANT FLYING SNAKES which can fly over, warp around you, and then fly off with you in their coils.

4. Frosty and Rudolph sing an extended version of "Why Am I Such A Misfit?" There are a great many musical numbers to break up the relentless driving action.

5.The lady who runs the circus is Ethel Merman. In a cowboy hat.

Whales? Armies of Snowmen? Sam Spangles, who is in fact indistinguishable from Professor Hinkle, the magician in the animated Frosty the Snowman? Ian noticed that one.

Anyway, I sat there with my jaw on the ground, through this, and Rudolph's Shiny New Year, which features Ben Franklin and a cave man. By that point, I had kind of given up.

everything is much better. Ian and I had a grand day at the art museum, although we spent so much time discussing Cyclops (the Greek monster, not the X-Man) and the Hydra that I am braced for nightmares. His, not mine.
Posted by betsy at 10:15 PM No comments:

1. Ear infection: Seems to be getting worse. 2 days of Zithromax left. What it if doesn't go away? It's like having a seashell against both ears for hours at a time. Except it hurts.

2. My bad attitude: I did absolutely nothing but complain all day long to anyone who would listen.

3. My black cardigan: we're reunited! OF COURSE it was at church the whole time I was looking for it. It's just, you know...black. Anyway, I've got it back. Yay.

4. knitting project: frogged. BUT the yarn survived the process better than I expected, and will be something eventually. But not exactly what I thought it would. And not for Christmas.

5. Phineas and Ferb all-weekend-long marathon: Disney does not actually have enough episodes of this cartoon to run it exclusively for 48 hours. AT ALL. Nonetheless, we watched a great deal of P&F this weekend, and sat through a couple of episodes twice, and I still think it's the best thing on TV. Plus this uses my superpower - identifying cartoon voices. Still the champ. (Though I would never have gotten Riff Raff without reading it on the internet.*)


*from a comment on Amazon: "But series creators... must be big-time Rocky Horror fans because the voice of P & F's clueless dad is none other than Richard O'Brien, one of the "Rocky Horror" creators as well as "Riff Raff" in "Rocky Horror". Performing other voices in various shows are Rocky Horror alums Tim Curry and Barry Bostwick"
Posted by betsy at 10:37 PM 2 comments:

How have I missed this???