Not Doing Me Any Favors

I work in youth ministry.

You can tell, because the other day I realized that I say "Awesome." Not ironically. Sincerely.At least once a day.

Yes, I sincerely believe that there are things in my everyday life that are so wonderful, so literally full of wonder, that they deserve to be called Awesome, and I call them that. To other adult humans. Out loud. And occasionally in emails. More than 7 times a week.

(I also use it in text messages. But for some reason, it's usually sarcastic when I use it in a text. Hmmm.)

Anyway, part of my (awesome) job is writing lessons for our kids on Sundays.

This month, we'll be trying working on empathy, trying to grind into their tiny little heads what Jesus said in Matthew 7:12 - "In everything, do to others what you would want them to do to you," (as it says in the flat-footed but exceptionally clear New International Reader's Version.)

So: The Golden Rule.

How do you get pre-schoolers to begin to recall scripture? Well, the same way you get adults and teens and centegenarians to - by singing a song.

Oksy, I don't dare you. I can't be responsible for the effect on my tender-hearted friends. or my under-18 friends, and I have plenty of both. You know, because youth minister.

The top result - the top PAGE of results - involve a parody rap song from Lonely Island, vocals by Andy Samberg, joined in this number by Justin Timberlake and Lady Gaga, some humiliating fake beards, and a bunch of clothes from Chess King.

The specific golden rule in the song is not the sum of the law and the prophets. It's an etiquette rule about is specific to a form of adult recreation, about which a woman might text a gent*, after which he would hop a transit bus to her house, with a 6 of Bartles and James.

It's not subtle, but it's pretty funny. Now I want to listen to some of their other songs, but I can't. Because I am now at home with my child. Not in my office at church. Right.

SO not what I was looking for. 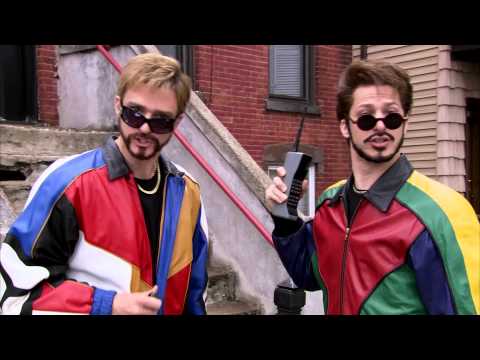 
:Bonus:  if you'd like to see a Golden Rule song that is possibly even more inappropriate for a pre-school Sunday School class, Google: Jack Black Golden Rule Song.