Thanks for stopping by. I am taking a break from blogging for the month of November. You can probably find me here, should you be so inclined.

If you're withering away without your daily dose of ME, you can check my archives here and at:
Flickr and
my baby blog.

I'm going on blog vacation! (Ah, would that I were going on an ACTUAL vacation, but that's not in the cards at the moment. In church, as in retail, we're just barrelling into nutty season.) But I will be snubbing you all, turning my back on the blogosphere for a month, while I concentrate my energies on something really crazy.

Husband and I enjoyed Halloween. Our 10-month-old did not, particularly, until he could get home and peel off his lovingly-selected bunny costume and run around the living room in his diaper.

I heard this guy on the radio the other day; I think I'll be reading his book (at least one) in December.

Nobody do anything interesting for a month, okay?
Posted by betsy at 10:53 PM No comments:

the power of art direction -

I've declared my intention to write a novel in a month with NaNoWriMo, but I would be remiss if I didn't point out that NaBloPoMo has a really really really good logo.

I did not write this, sad to say. Unbelievably, it's a recruiting pamphlet from a college.

AT THIS VERY MOMENT, somewhere in the world. . . .
a woman is reading a letter from her son, announcing his engagement to a girl the mother has never met; a five-year-old boy is sitting in a Laundromat in front of a large commercial dryer, reading a comic book while a pink stuffed rabbit tosses around and around; it’s spring somewhere, and somewhere else it’s autumn and the papermakers go down to the railroad tracks to collect the dried milkweed stalks; a movie star is eating Chicken Vandalia out of a white cardboard container in a hotel room while watching a TV program about typecasting in ancient China; a large number of people have the same cold; a man writes a love letter, carefully shaping the letters on the creamy white paper, imagining his beloved’s face as she reads the words he is writing; an artist is loading slides into a carousel as he prepares to give a lecture about Japanese washi; a baby has just said his first word (doggy) and an old woman has just said her last words (Don’t forget–); a young graduate student is sewing together an Ethiopian style book, and humming to himself; a small group of women are sitting on a porch in a rural village watching a meteor shower, and a man in the same village watches the same cascade of meteors, and writes a poem about it; a man and a woman stand on opposite sides of a bed, smiling at each other; a third grader makes his first sheet of paper; books are burning; printing presses are churning out tomorrow’s news; at this very moment, somewhere in the world, you are reading these words, holding this slender pamphlet in your hands and thinking about the things you want to make, the ideas you haven’t turned into reality yet. Somewhere in the world there’s the perfect place to work on these ideas of yours; that place is here, at the Columbia College Chicago Center for Book and Paper Arts. Wish you were here.

The Columbia College Chicago Center for Book and Paper Arts

Good Lord. A college brochure made me cry.

It even has an excellent URL: http://bookandpaper.org/

LINK
Posted by betsy at 9:11 PM No comments:

Something is badly wrong with me.

Just signed up to write a novel.

In the last 12 months, I have sewed 3 seams and knit not even 10 rows. I don't journal regularly, and as we can all see, I don't keep up on any of my blogs.

The stylish icons immediately communicate two things: 1) I am a serious writer now, and, 2) As a serious writer, I will not have time for household chores until December.

It's the little things.

I've mentioned that I like the band Killers a lot. (I like all those effeminant neo-new-wave bands - Scissor Sisters, Panic at the Disco.) I knew I loved their song Mr. Bright Side, and I knew that one of the lines - "Open up my eager eye.." - was very evocative and might make a good blog title.

But it's even more than that.

In the English version of 99 Luftballons (as I was reminded when I heard it on the radio yesterday) Nena sings that the war machine 'opens up one eager eye'...

God talks to me through the TV

We end up watching Inside the Actor's Studio rather regularly, since it comes on Bravo Mondays after The West Wing, which is perhaps the only real addiction my non-smoking, non-gambing, never-even-been-tipsy husband has ever had. He leaves his body in the ass-groove on the couch and goes to live with CJ and Josh for a couple of hours a week, and that satisfies him for another 7 days or so.

I have mixed feelings about ITAS - on one hand, it's more tiresome celebrity worship dressed up as culture and education; on the other hand, it's occasionally educated people talking about ideas without shouting, so we'd want to encourage that, right?

Even when I have no interest in the guest, I'm always riveted by the questions at the end - the Bernard Pivot questions. Since everyone knows what they'll be asked, they have plenty of time to think up sparklingly clever and self-aggrandizing answers, AND YET I feel like the answers they give are (I think unintentionally) incredibly revealing.

So tonight Dan Castelanetta - Homer Simpson - was asked "if heaven is real, what do you hope to hear God say when you arrive?"

the thing that good hosts and good cooks never do. I invited someone for dinner, and prepared a recipe I had never made before. From a magazine. Can you imagine?

In fact, I've never made a pork dish before. At all. I had to ask our guest how to tell when pork is cooked. (Luckily, he knew.)

I also bought a $10 bottle of wine based soley on the recommendation of a liquor store employee who admitted that she had never tasted it, and in fact, didn't like wine much. It had a pretty label.

Everything was absolutely excellent.

According to the terribly exciting Red White and Rose list of great wines under $10 (I just found this site while looking for an image of the wine label! I really am terribly excited! We may spend the next several months in a mild, delicious haze! You should be really nice to me and see if you can't get invited over! The house smells a little like cats, but I figure enough 'great wine under $10' will probably mitigate...)
)

Promessa Rosso Salento ... a blend of 85% Negroamaro and 15% Primitivo. This very spicy, rich wine has notes of plum, violets, anise, tobacco, and licorice. The tannins compliment the spicy nature of the wine.
Price and quality earn this wine one star (out of a possible three.)

I guess not everyone enjoys a ride in a convertible 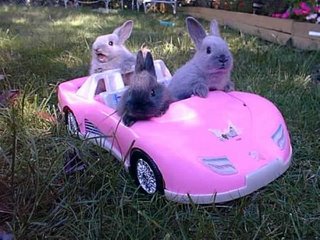 from the very weird bunny yawn website. Via Sweetney.
Posted by betsy at 11:03 PM 2 comments:

Words Fail, and things get interesting.

Just saw Little Miss Sunshine, which is an very rewarding film, mainly about the limitations of language.

Please note: If you happen to be going through any sort of personal rough patch – family bickering, career disappointment, parent/child sadness, romantic loss – I might suggest that you wait for the video. This may not be the ideal film for you to see.
(On ‘date night.’)

But if you brave it, if you can hang in through some undeniably uncomfortable moments, you may have a fairly lovely and cathartic experience. It’s a bit like Napoleon Dynamite – words fail, and that’s when things get really interesting. There are no weak performances; Steve Carrell especially distinguishes himself, and especially with his physical work; it’s really excellent.


I’ve also been watching Studio 60 on The Sunset Strip, which I have begun to suspect is not excellent. I wanted very much to like it – I’m fond of Sorkin, my INSANE LOVE of Sports Night is well-documented. This show has theatre history jokes. Fatty Arbuckle jokes. (And not the obvious ones!) Gilbert and Sullivan parodies!

Really, I am the target market for this show. Me personally.

What’s good: well, the fact that there’s a show on TV that wants to make a non-dirty Fatty Arbuckle reference. The female characters seem smart, and when male characters who treat them otherwise, it’s evidence of untrustworthy character and bad judgment.

He understands that work is more fun than fun.

This is the best thing about Sports Night, and it’s by far the best thing about this latest show. It’s a beautiful artistic tribute to adrenaline, to that moment when you’re working hard and surrounded by stimulating people who really care about what you’re doing and you are fairly confident but if we’re really honest NOT REALLY 100% SURE WHAT’S GOING TO HAPPEN IN THE NEXT 60 SECONDS….dude, that’s when you know you’re alive. Seriously.

When Sports Night was on broadcast, I used to cry every week as I watched it. Because someone got it.

Here’s what, so far, seems pretty bad – one of the characters is a comedian and a Christian, not to mention a beautiful smart woman and a romantic lead. So far, I kinda like her, and I like that various men admire/love her. But honestly – I am in the God industry, and I don’t have as many conversations about Christianity in a week as this woman does. It is too early, for me at least, to tell how this peculiar bit of writing is going to work out.

And here’s what’s really bad already. The show is about the producers, and production, of a late-night sketch comedy show on a broadcast network. (But not Saturday Night Live! And you can tell its not about SNL, because people refer to SNL, to actual events in SNL history, by name. Matthew Perry’s character namechecked Wayne’s World on Monday. SNL is the competition for the show-within-a-show.)

The parts where the comedians are telling jokes on TV should be at least a little funny.

If they’re not, then nothing else makes sense. All the talk about the ratings, the focus groups, the switchboard lighting up, even the long (long long) montage of the studio audience laughing and applauding…complete nonsense.
Posted by betsy at 12:13 AM 3 comments: