Link to my sermon

they let me preach again. Click to listen or watch.

At least this will lead you to a fuller appreciation of the high-quality preaching in your church.

All kidding aside, I just watched the video for the first time, and through the haze of crippling self-conciousness (Maybe I'll look less fat if I squint. Um, okay, NO. Hmmm.) I can say I feel decent about this outing. I meant all that stuff.

Here is how I have come to preach, twice, at Cedar Ridge:

every summer we have The All Ages Show, aka family services, or Sunday School Teachers Get August Off. As staff liturgist and tech director (I bet I'm the only one of those in the country!) I'm heavily involved in the collaborative planning of these services. (I'm heavily involved in the planning of practically every service, but most of those discussions are small - me and the speaker - and efficient, not free-wheeling brainstorming that August entails.)

At some point during the brain storming, I am unable to control myself and go off on some long, ill-considered rant about 'what we should really say' about this topic. (Because I'm, you know, the tech director. So I am perfectly positioned to shoot my mouth off about matters of spiritual formation.)

And then I'm preaching.

I'm preaching again this fall, and it did not come about in that way. For my next sermon, I was actually asked, and put on the schedule back in spring. I will be preaching to the grownups in November.

glumbert.com - A Wonderful World
Posted by betsy at 9:24 PM No comments:

Alway hoped we'd get to be apostles

For about 30 minutes a week, VH1 shows something besides "I Love the 80s".

(This seems like the best time to interject that I take a back seat to absolutely no one in my love of the 80s. NO ONE. And even I hate "I Love the 80s.")

So occasionally (literally) you can see a music video on cable. Which is how I saw Big Girls Don't Cry by Fergie. Which I actually like. I am not here to dis Fergie, who I like especially in the Black Eyed Peas.

But I must point out something I noticed in the costume area. I guess it would fall under the costume department, though it isn't actually an article of clothing.

The romantic lead in the video, the guy that she's leaving so she can 'be with herself and center', is Milo Ventimiglia. You know, Peter from Heroes. (Or Jess from Gilmore Girls, if you prefer.) I LOVE Heroes - we're all rather excited about the new season. Anyway, he's in this video, and he's playing some sort of drug-dealing thug - you can tell by all the leaning on cars and the passing of rolled banknotes.

He's also covered with tattoos, which look quite real and natural. You can see them in the photo below.

He looks nice, right? If you like skinny guys, he looks pretty good. And reasonably tough.

Except take a good look at the tattoo on the inside of his forearm.

To me, it's pretty obvious:

What every discerning drug dealer has inked on his arm - a permanent tribute to 1971's awesomest rock opera, Superstar.

It occurs to me that this may be Milo's real tattoo - the others painted on for the role, but this one could be real. Can't you imagine him playing Peter (aha! Foreshadowing!) in a college production? Say, as a sophomore? And then the leads getting drunk together, going out to get tattoos, commemorating their lifelong bond?

has long been Chez Miscarriage, which left us about 2 years ago, on account of getupgirl having a kid and undoubtedly becoming far too busy/exhausted/happy to blog. And if she did/is, I guess it would have to have a new name, now, wouldn't it?

I really admired getupgirl's writing, and her honesty and selfawareness and her sense of humor.

But I might have a new favorite dead blog. Except it may not be dead.

I've spent much of tonight reading What Would Jesus Blog?, which is, in fact, Jesus' blog. Jesus likes a lot of bands, most of which I have never heard of, but that would make sense, I guess, seeing as he's omnipresent etc.

But he also writes nice things, which I've always imagined (or hoped) Jesus would say.

What I’ve Learned
By Jesus Christ

1. God made your world and religious people will destroy it.
2. Nobody will believe you if you tell them you’re going to get killed but then come back to life.
3. Gatorade A.M. is basically just normal Gatorade with an annoying marketing strategy.
...
6. If you don’t consider yourself a leader, My Dad thinks you’d be great at it.

...
14. People hate to hear the truth. Weezer is underrated and Sonic Youth is overrated.
...

17. I don’t need you to do anything. The story isn’t about you.
18. Belief that I am who I say I am rarely comes through debate.


But here's something really beautiful: it's nearly all of the latest post, from May. (I really want to author to come back to blogger and blog some more, for my amusement, but maybe if I had written this, I'd be satisfied too...)

Once you become friends with Me, part of Me literally moves into your body. I can do that. I’m very powerful. So, that part of Me helps you out all the time. If you listen close, you can her Me talking to you through that little version of Me that lives in your heart. When you talk to Me, this hobbit-like mini-Christ is what translates your conversation into the language of angels. It’s the perfect language, very pure. I’ll teach you it when you get up here. Anyway, this translator is able to take the awkward prayers you attempt to send up to Me, and deciphers it into what you really mean. For example, you wouldn’t believe how many people pray nightly for Me to “bless their day”. That’s pretty vague. You want sunshine? You want to win the lottery? What does that mean? Well, that’s one of the reasons I move inside you, so I can figure out what you are saying. That’s also why you can worship Me by singing words you might not understand like “hallelujah” or “hosanna in the highest”. I can figure out what you think you’re saying, and through your odd prayers or worship songs, you and I can have a relationship that is stronger than you realize.

That being said, I gave you all “great” voices. Just because you don’t think you’d make it to the judge table on American Idol doesn’t mean you have an amazing voice. Ever hear of Bob Dylan? His albums sell more than Chris Daughtry, and he sings like a duck… seriously, when ducks talk, it sounds like “Hard Rain’s Gonna Fall”. The voice I gave you, I hand picked for you, and if you use it to sing to Me, it’s more moving than any other earthly sound.

What keeps you from strapping on some explosives and running into a hotel lobby, shouting "John 3:16, bitches!"

my favorite new quote, which I happened upon on the brilliantly named They Promised Us Jetpacks.
Posted by betsy at 10:38 PM No comments: 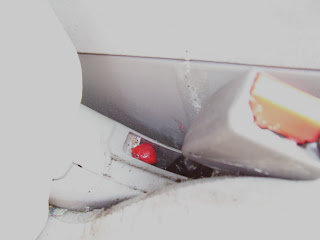 Or Why My Car Smells Great Today But Will Smell Totally Gross By Sunday.

If you were to look closely, you might be able to discern a maraschino cherry wedged into my passenger side seatbelt socket.

See, I was buying some stuff at Target. And the Target in my little town in near the Chik-Fil-A. Wanting to squeeze every second of freedom and alone time out of this childless errand, but at the same time wanting to be kind to The World's Best Husband, I decided to stop and get us milkshakes.

The drive-through was crazy; being childless, I could blithely PARK MY CAR! and LEAVE IT! And WALK INTO A PLACE. By myself. So I did. I got two - chocolate for him, Cookies and Cream for me, complete with tons of whipped cream and a cherry. (I think I may like the whipped cream better than the milkshake. When I was pregnant, and being accomodated by everyone on the earth, I regularly ate the whipped cream - all of it - off other people's desserts and Starbucks'. I didn't eat dessert myself - just everyone's whipped cream. What an ass.) Anyway, the nice people at Chik-Fil-A tucked my shakes into the 2-shake carrier, which I nestled into the seat (they're too big for my cup holders) and drove home.

I made it almost all the way. But when I tool the left at Pilgrim's Landing a little too quickly, the holder tumbled, and the chocolate shake lost its dome top, leaving a little dune of whipped cream across my seat.

My thoughts at this point, all within a split-second:
1. Fuck.
2. Well, most of his shake is still in there. It's just the whipped cream.
3. Mine tipped over but seems mostly intact.
4. mmmmmm, whipped cream...

and without thinking, I reached down and scooped up a portion of the spill with my cupped hand. Yes, and smeared it into my mouth. Look, I'm not PROUD of this, I'm just telling you what happened.

And while it happened, my attention was momentarily diverted (mmmmm) and I drifted into the other lane.

Nothing happened - I didn't hit anything.

But, figuring that I really should be in my own lane, I jerked the wheel quite suddenly.

And that's when my shake fell over a second time and dumped out between the seats. And across my shirt and shorts. I already has some on my NECK from the whipped cream-scooping a moment before.

And then I was home.

I wiped up the seats and floormats with the paper towels that I keep in my car (it will surprise no one to hear that this is not the first spill in the front seat, though it may be the most extensive.) I walked into the house, sheepishly handed Eric his two-thirds of a milkshake, and continued up to the shower without a word.

Anyway, the Prius smells frickin' awesome, but a couple more hundred-degree days will sour the upholstery.

At least, that's what happened after the Latte Incident.
Posted by betsy at 10:13 PM 2 comments:

Labels: I am a dweeb, life among the early adopters (Prius)

liability into an asset

In the Washington Post print edition, Style reporter Jennifer Frey drew the short straw and was sent to cover a press junket featuring the teenaged cast of the movie Bratz.

They could go on and on -- and do, full of details about the others' little quirks. They have even assigned one another Disney princess names: Skyler is Cinderella, Nathalia is Sleeping Beauty, Janel is Mulan.
"Disney doesn't have any African American princesses," Logan says, "so I get to be Superman."

Everything else aside - I think that's awesome.
Posted by betsy at 8:42 PM No comments: