moderately ashamed of myself

via Jesus Needs New PR.
Posted by betsy at 12:22 AM No comments:

Labels: I am a dweeb

what I will bring to the bonfire:

These which I saw on the always-delightful SnackReligious.
EDITED TO ADD: These were a huge hit at the Guy Fawlkes festivities, and also with the babysitter. I'm thinking the second pan will get a similar reception at the potluck Sunday. Recommended.

And, no, we haven't made pretzels yet, and it doesn't look like it's going to rain tomorrow, which means that there will probably be a limited amount of kitchen time.

I have a video to put together, but my laptop does not have a big enough brain to handle it. (This would be a REALLY bad week for the servers at work to crash, incidentally. They've been kind of dodgy lately, randomly refusing to print docs and other occasional hiccups that we've been working around. Anyway, not this week, please, is all I'm saying.)

Knitting news: I am almost done with the famous entrelac stroller blanket. I had plans to work on it at various times this weekend - car trip, kid's nap, now...but I've made a lot of progress and feel like the end is in sight. If I can just remember how to do the bind-off triangles...

playdate news: If the week shapes up the way the national weather service seems to think it will, we may have one more backyard party on Friday, before daylight savings time ends.
Posted by betsy at 10:11 PM No comments:

they look depressed. But I'm excited. More at Pedestrian.
Posted by betsy at 12:18 AM 2 comments: 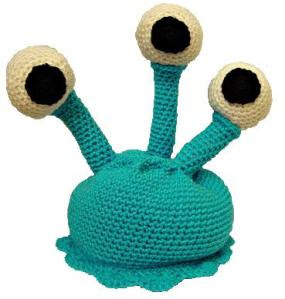 Another Day, Another Monster is an excellent blog by a woman whose name I totally cannot find because the computer is cloggy and I am lazy. The woman makes snarky comments to accompany her photos of her pretty excellent little amiguri monsters, of which she creates a new one every day. I found this through the Lion Brand blog

[as most of you know, Lion is a brand of yarn, available at a discount at all your better Ben Franklins and Hobby Lobbys. I am a completely unconvincing as a yarn snob, so I'll admit that I have knit several of my fav projects with Lion Brand yarns, such as the much-aligned Homespun.

BUT NOW IT WON'T BE! Now I'll be a unique hit on Google, should anyone ever try to Google that phrase again.)

(Anyway, I digress. Many people hate Lion Brand yarns; while they aren't my favorite, I find many of them quite serviceable, especially at markdown prices.]

MY POINT IS that this blogger apparently works at the Lion flagship store in NYC, and I was pleased to see Lion promoting a blog that is written in a normal venacular, including the occasional mild curse word. Go Lion Brand! Go boldly through these squeamish times. Yay.
Posted by betsy at 11:55 PM 1 comment:

So I made this chicken paprikash for dinner on Monday night. And it was fine. It had some decent flavors, and it kind of 'grew on us' as we ate it.

But tonight I looked into the fridge and said "I can do better."

Heat the oven to 450, and at the same time warm some olive oil in a cast iron skillet on the stove top. Take 5 boneless chicken thighs - salt and pepper them and brown them - about 4 minute on one side, 3 on the other.

During those 7 minutes, wash a pint of grape tomatoes, and squish them (I guess you could cut them in half, but I just used my fingers.) into a baking pan with olive oil.

Slice half a large sweet onion and several cloves of garlic. Throw those into the stovetop pan - it will still be pretty hot and oily. Return that to heat and cook until the onions are soft and brown. Drop in some slices of red pepper and some sliced mushrooms and cook some more. (You may need to drop in a bit of olive oil or butter with the mushrooms.)

Take the pan out of the oven; assuming the chicken is done, put the chicken on a plate and cover it (with foil or another plate.) Pour the rest of the contents of the baking pan (oil, tomatoes, juices) into the stovetop pan and stir.

2 tablespoons of tomato paste
a tablespoon of paprika
a tablespoon or more of those chopped hot peppers they put on hoagies
and a quarter to a half cup of heavy cream.

It's all bubbly now - slip some of the chicken into the sauce (it's probably won't all fit) and turn down the heat, and simmer it a little while - like 6 minutes or so, which is how long it takes to make egg noodles.

Seriously, this is good. Don't use canned tomatoes when there are fresh ones around. And seriously - hoagie peppers.

AND it took 36 minutes from walking into the kitchen.