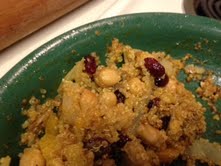 Take one large onion. Slice it thin and drop it into a hot hot pan with a couple tablespoons of olive oil. Salt and pepper liberally, let it soften.

While that's cooking, slice some red and yellow peppers that you found (also softening) in the (poorly-named) "crisper". About the equivilent of one large pepper (which is what's left when you excise the iffy parts.) Cut into small dice. Don't do anything with them yet. If you find you have a cucumber, peel and dice that as well, and set it aside.

If the onions are turning golden, it's time to drop in the cooked quinoa. (You can cook some fresh - take the onion pan off the stove, tell everyone dinner will be 10 minutes later than you had said, and cook according to package directions. I had some left over -  most of a cup.)

Open and rinse a can of chick peas. Throw those in with the quinoa and the onions. Turn down the heat - a little crispy brown in awesome, but blackened is not delicious. Splash in a little water if you're worried about burning. Throw in the diced peppers.

Stir in a large spoonful of Patak's curry paste. We use hot, but there's also milder. Let that cook for about 5 minutes. Remove from heat - stir in a handful of dried cranberries and cover, let it sit for a few more minutes.

Vegetarian (vegan without the yogurt), high protein, all the fiber you need. Very very good.