I had a big baking night the other night, and now I can tell you about it, because the surprise-ee was completely surprised.

When someone is leaving church staff for greener pastures, we usually do a couple of things - we arrange to pray for them in Sunday services, and we usually have some sort of party/meal/something.

Well. On Thursday, my co-workers and most of their spouses/kids/grandkids pretty much kidnapped our departing youth pastor and took him to the beach for a picnic (plus all that beachy junk like building sand castles, swimming, poking dead stuff, reapplying sunscreen.) The weather was beautiful, and the trip was quite grand.

(Until I locked the keys in the minivan after dark, but that's a different story. Even that worked out fine, actually.)

My contributions to the picnic were (oh, guess:) .....right, desserts.

1. Brownies (from a mix, nothing to get excited about, which is not to say people didn't enjoy them - in fact, they were the first thing to disappear.)

2. Macaroons, but baked in one huge square. I didn't know if these would work out, but the top and bottom did brown up nicely. (Recipe another time, I promise.)

3.
Flapjack: This did not come out - they didn't hold together at all, so people scooped up handfuls and kind of poured the loose chunks into their mouths. (This works okay on the beach; it would not be so great in someone's carpeted living room.) I do believe the linked recipe is wrong. It needs more sticky stuff. This (when it's good) is the favorite dessert of The New Guy; a traditional British baked good comprised of rolled oats, butter, and cane syrup. I wrote about my earlier misadventures with flapjack on this blog, but I'll be darned if I can find it now.

4. Shortbread: This came out great. I followed this recipe except I spread the whole recipe-worth of dough/batter into a square pan. After chilling and scoring, I baked it at 350 for about 30-40 minutes, until it started to turn just the lightest, most delicate shade of brown.

I tasted a bite, and decided that it was so good it needed some chocolate - so I melted about a quarter cup of semi-sweet chips, a tablespoon of butter, and a scant teaspoon of instant espresso powder.

[Melting chocolate in the microwave: put everything in a bowl and nuke for 30 seconds. It won't look any different. Remove from micro and stir with a fork for 30 seconds. Nuke and stir again as needed. It's hard to screw this up.]

I spread that in a thin layer over the baked, cooled shortbread.

It was super. Even after it got some sand on it.
Posted by betsy at 9:53 PM No comments:

Me: I don't have any of your cds in the car right now - would you like to hear the music I've been listening to?

Not this one, actually. The Mango Pickle song.

I glance into the back seat when we stop at the light. Ian's eyes are WIDE, and he is gripping the armrests of his carseat. He is smiling - it's the same face he made the first time he had solid food.
Posted by betsy at 11:37 PM No comments:

with the song stylings of Ian MH

Ian: can we listen to The Candyman?
Me: I don't have the ipod, but we can sing it.

Ian: Did you hear what I did, Mom? I was mostly singing the one version, but that was the ending of that other version! I just threw that part in. For fun. Just for fun.

Ian continues: In this version, the first part of the bridge is really loud.
me: how loud? Give me an example.

Ian: THE CANDYMAN MAKES
EVERYTHING HE BAKES
SATISFYING AND DELICIOUS!
TALK ABOUT YOUR CHILDHOOD WISHES!
you can even eat the dishes! 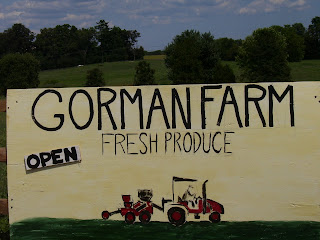 We finally hit the farmstand (yes, the one I've been reading about since February!) when it was open! 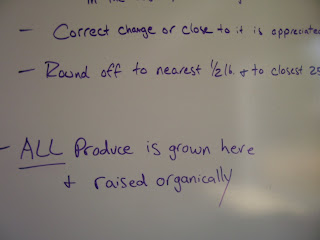 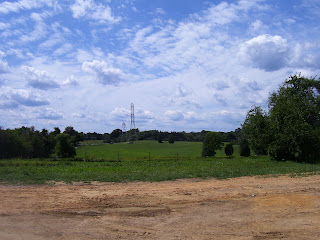 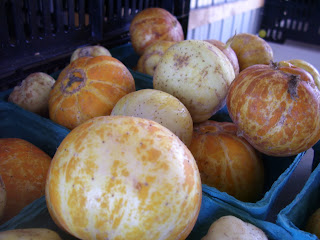 these are lemon cucumbers. I have no idea what they taste like or what one might do with them. But I believe Heidi at 101cookbooks does. So I bought some.

don't know why these sentences are coming out underlined. Just ignore it. That's what I'm doing. 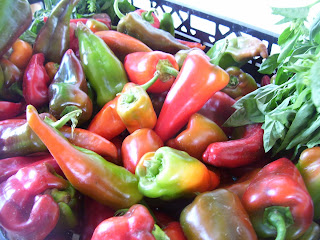 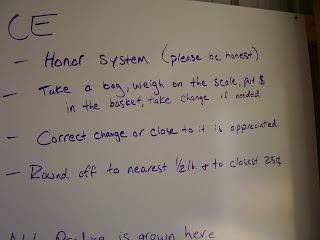 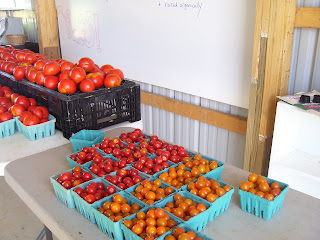 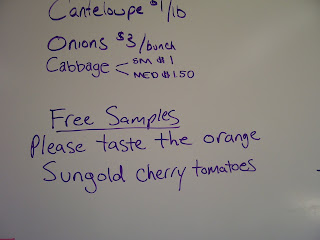 Oh, okay, if you insist. 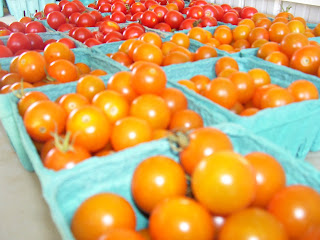 Cherry Tomatoes! It's whats for dinner!

Our haul, for $10 - 2 Zucchinis and one yellow squash, a pint of lemon cucumbers, a pint of sungold tomatoes, and the two cutest little cantaloupes in the history of organic farming. So dinner was cantaloupe (appetizer, and Ian asked for more for his main course), corn and green beans (not local, from Delaware, left over from our trip to the beach) and piles of perfectly ripe raw cherry tomatoes with nothing, not even salt.