Linked on Parent Dish (the former Blogging Baby) under the headline "Toddlers as Contraceptive Tool."

Friday nights at our place

Whoopee is brilliant.
Posted by betsy at 11:54 PM No comments:

1. Hello Kitty Bento. from here via sweetney, of course.

2. I certainly would like to go to this. Even more so, since I went to the site to copy that URL and saw that Cheap Trick and the Beastie Boys were on the same day as the Police, Ben Harper and Fountains of Wayne.

Am I the sort of person who camps out to spend $100 on a concert ticket for an all-day-and-night show to which I would be going alone? I have a couple more hours to figure out the answer to that question...but I have a sneaking suspicion I know the answer, at least for this year.

3. I listen to the Beastie Boys on the stationary bike 3 times a week. Yes, your faithful coorespondant has been working out faithfully - cardio and lifting - 3 mornings a week since February. I feel strong, I feel accomplished, and, of course, I feel conflicted. Because I'M NOT DOING THIS TO LOSE WEIGHT. Because I LOVE MYSELF and OCCUPYING LESS SPACE IN THE WORLD IS NOT MY GOAL. And ALL WOMEN ARE BEAUTIFUL. And I REFUSE TO SUBMIT TO THE DIET-INDUSTRIAL COMPLEX which makes MILLIONS on women's SOCIETALLY SANCTIONED SELF-HATRED. And exercise has many benefits to health and longevity not reflected on the scale.

But come on. One lousy pound? In 3 months?
Christ.

4. Work is very good. Parenthood is pretty good. I am going through a rather good patch with both, having a respite from the 'coping requires 110% of my energy' period earlier this year. Thank God. 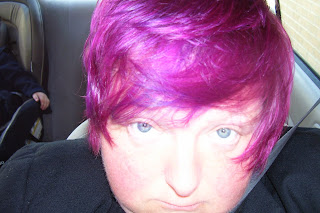 5. It appears I have somehow grown a large mop of purple hair.

A couple of months ago, I had decided, under the influence of one-too-many episode of What Not To Wear, that I would take a bold step and pay a professional person to give me a haircut. A woman's haircut. (I've been clipper-cutting my own hair for about 10 years.) This led me to consider what this professional person would have to work with (not much) which led me to let it grow for a while. In June, I said. In June, I will have my hair cut.

Here's the thing - I'm not sure quite how to go about this. There's a lot riding on this haircut (WHY? If I hate it, I can just go home a shear it off, and look as I look every summer, and also cut about 8 minutes of product application and blow-drying off my gym routine.) and I want a nice one, a great one, a fabulous one. I want to look modern and cool, a little avant garde, but also be low maintenance. (Hmmm.) Clearly, I need an artiste, but in a low-to-medium price range. How do I shop for a haircutter?

6. Young master Ian also needs a haircut. His has been growing since...his conception. It's about as long as mine, actually.

For his first cut, I envision a barber shop like the one my dad and brother went to - the big chair with the booster, the cotton cape, the fat guy brushing his the little hairs off his shoulders with a little soft broom, the stack of Field and Streams and Argosys.

I don't imagine anyone will have a small black-and-white TV with a wire coathanger sticking out the top, playing westerns or a Yankees game. And I don't think there's Argosy anymore.(Wikipedia confirms that Argosy was last published when I was in high school.)

Anyway, how do I find that barbershop?
Posted by betsy at 9:34 PM 1 comment:

but I'm digging the picture. They're here via Manolo.
Posted by betsy at 9:17 PM No comments:

He's bored with what he likes but scared to try anything new.

That's a quote from Alice (yes, like she's my close personal friend Alice from down the street. She's not; she's the author of Finslippy, a blog I admire very much, whom I assume I will never meet in person or even exchange email with.)

So it's Alice, writing about her kid Henry and his relationship to food. (This week, he will only eat orzo. Please, Lord, let THAT particular cup pass us by.)

But orzo is not my point, though I am sympathetic. My point is that she has, in one matter-of-fact sentence, summed up my life. Maybe 'Life'. Sorry if that sounds melodramatic, but there it is.

Seriously! Don't you feel that way? At least intermittantly?

I haven't even finished reading her post - that phrase struck me so hard that I had to hop over hear and note it.
Posted by betsy at 9:59 PM No comments: