Set a huge pot of salted water to boil.

Heat up a cast iron deep skillet or dutch over on the other burner over fairly high heat. Into that, drop 2 slices of bacon and stir them around to keep them from sticking. Once they are very floppy, and some bacon grease is rendered, drop 3 cloves garlic, smashed, and about one-third of a huge sweet onion, thin-sliced. Cook that until the onion starts to get soft. Drop in some sliced mushrooms. Keep moving the stuff around the pan. (You can add some butter or olive oil if it seems to be getting too dry.) Add salt and pepper. If it seems like just a little too much - that's the right amount.

Take you kitchen shears in your hand, point the tips down into the pan, and clip the bacon into small random pieces, right there on the bottom of the pan. Lower the heat a little (from about 9 to about 6.)

At this point, your pasta water should be boiling like crazy. Cook about 8 oz of pasta (I used whole wheat fettuccine) in the water until it is ALMOST as 'done' as you like it. (Don't forget to stir the bacon mixture. You don't want it to stick irreparably.)

Is it almost done? Good - now throw half a bag of frozen peas into the water with the noodles and put a lid on it.

Back to the bacon pot. Lower the heat again, to about 2. Splash in some cream or whole milk and stir. Drop in some grated parmesan - say a quarter cup - and stir until it's smooth.

This is really, really delicious, and takes very little time or technique.
Posted by betsy at 9:46 PM No comments:

We have our challenges, we parents. We parents of shockingly willful preschoolers. (At least, I am shocked. Oddly, no one else seems particularly shocked. Hmm.) Anyway, when he almost-willingly used a public restroom this afternoon, I declared that we would have a party. With cake.

This recipe is a cake I grew up with – it was a staple at class parties and church suppers, usually with no icing. The recipe is in plenty of places; I noticed it’s even in the most recent issue of Martha Stewart Everyday Food, where it mentions it’s in a new cookbook called “Mad Hungry.” It’s called Busy Day Cake there, which is a good name, and cooks.com calls it vinegar cake - but to me, it was always Crazy Cake. (Until today.)

This recipe has a ton of advantages. You mix, bake and serve it in one dish, so all you have to wash today is a measuring cup and 2 spoons. It’s vegan, it’s natural, it’s very cheap. But the reason I made it today – we were out of eggs. I felt that taking the little darling to the supermarket would be, um, pushing my luck. It’s definitely a ‘pantry staples’ dish.

Crazy Cake can turn out heavy, but the one I made today was quite light and flavorful and had nice textures - chewy outside, tender inside and a little touch of gooey at the center.

Heat your oven to 350 degrees.

In a pyrex cassarole or an 8-inch square baking pan, whisk together:

1.5 cups flour, 1 cup sugar, 3 tablespoons unsweetened cocoa powder, 1 teaspoon baking soda, and half teaspoon salt. You can also throw in a little cayenne pepper, chili powder or nutmeg…I thought I was being all clever and sophisticated, but I couldn’t taste them.

Make a well in center of dry mix and pour in 6 tablespoons vegetable oil, 1 teaspoon vanilla extract, 1 tablespoon white vinegar, and 1 cup cold water. Stir till smooth. This is when I threw in a couple handfuls of semi-sweet chocolate chips. These are a great addition, but some sunk – if I had thought of it earlier and put them in with the dry ingredients, it would have been better. Bake until a chopstick inserted in center comes out clean. In a square pan, this will be about 40 minutes. – with the cassarole dish, which was deeper and smaller, it took about an hour. You're supposed to let it cook completely, but it's really good while it's still a tiny bit warm.

Bonus tip: Best Icing Ever, I am completely serious:

I improvised some buttercream the way I always do – cream soft butter (regular, not unsalted), add a drip of vanilla, and confectioners sugar by the spoonful, scrape down the sides of the bowl, keep tasting…but today, I threw in a chunk of cream cheese. Whip until fluffy. This is more definitely the best icing I have ever made, and it may be the best icing I have ever eaten.
Posted by betsy at 11:04 PM No comments:

Watch this (don't let the thumbnail scare you)

This was on Lifetime last night, during Project Runway (which I am kind of...over, sad to say. It's been a beautiful relationship, but we've grown apart.) The black and white and the intercutting is just so ravishing. I don't know if I'll like the film (I admired Rob Marshall's work on Chicago, but I'm concerned that he's returning to those same ideas...exactly those same ideas.) but certainly do like this.
Posted by betsy at 9:36 PM No comments:

this made me smile.

Got a little time in a bookstore yesterday, where I wrote completely non-memorable things in my journal and also look at some very fine knitting books.

That is from this one:

but this one is also good: 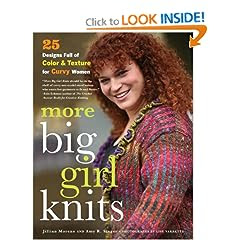 Anyway, a little cairn cozy for you on this gross rainy day.
Posted by betsy at 11:17 PM No comments:

I made pie crust, more noteably, which I had never done before. I found a butter pastry recipe in my beloved and completely unbound Easy Basics for Good Cooking.

Put 1 cup of flour in your food processor.
Add 6 tablespoons of cold butter and a small amount of salt.
Pulse the food processor a few times. In much less than a minute, you'll have a bowl of even, uniform tiny lumps of buttered flour.
Break 1 egg into the food processor, and pulse a couple more times until it comes together into one smooth lump.

Wrap the lump in plastic wrap and stash it in the fridge for a while. (The recipe calls for one hour, but I had it in a lot less than that.)

I filled this with 3 chunked apples and 2 handfuls of frozen cranberries, tossed with sugar, cinnamon, allspice, a splash of apple cider, and a spoonful of cornstarch. Ian helped me gently place the top crust on, and was very happy to poke holes in it. Baked at 425 until the top was brown and crispy, the filling was bubbly, and you can pierce the apple with a table fork. Like 40 minutes or so. (I had to cover the top with a piece of foil for the last part of the baking.)

I thought I had rolled this crust out way too thin, but it came out great! It took a lot for me to not STAND THERE AND EAT THE ENTIRE PIE.

I also made a great apple dessert last night, which I'll tell you about some other time.
Posted by betsy at 11:38 PM No comments: