The fruit of the Spirit is not self-conscious misery that gets more self-righteous with every bit of extra attention it gets.

As near as I can tell, and I've put some thought into this, Dylan's a genius. (I thought that even before she wrote the essay above.) Frsnkly, I'm a little bummed about Dylan - like another fascinating woman that I got to know not-well-enough, she's moving away. Sigh.
Posted by betsy at 11:27 PM No comments:

yes, and getting a late start. Sorry.

[Dear readers: I AM NOW GOING TO WRITE ABOUT PROJECT RUNWAY, A CABLE TV REALITY SHOW ABOUT FASHION DESIGNERS. This is definately a taste thing - either you're in, like I am, and you are the perfect target market for this sort of thing, and find yourself obsessing about it; or you're out, and cannot imagine a worse piece of TV than an hour every week about the drama of fabric shopping and industrial machine threading. Feel free to skip ahead. Seriously. Because this entry is Talkin' PROJECT, BABY!]

First of all, I agree with Tim, who said in the audition special something to the effect that this group was clearly far more qualified - consistant, experienced, skilled, trained - than previous groups.

I'm not sure it's as interesting, interpersonally. But then, thinking back, it's hard for me to recall whether I was really invested in Andrae, Nick et al by this point in Season 2.

That being said, I was SHOCKED BEYOND BELIEF when Malan was cut. He was so obviously primed up to become the supervillan, the Santino of Season 3. I also...well, didn't LIKE the gown precisely, but thought it showed both imagination and skill. Dude, he was good TV.

However, it does make rather teh statement: this season is already less predictable than one might have, um, predicted; one is not safe just because one is cultivating a character, trying to be 'good TV'.

It also opens up the floor for a new supervillan to emerge. Will it be The Archetect, with her hyper-perfect look and her hands far too clean to touch a dog?(I feel she really set herself apart with that little moment in last night's episode.) Spazzy Self-Trained Angela, who clearly Didn't Come Here To Make Friends? Neck-Tattoo guy?

Keith also rather distinguished himself last night, as a designer and as potentially Good TV, Bitch Division. Could he win?

It's too early to have a favorite yet, though I was impressed with the many of the designs last night, especially Keith's, and Alison's. I also very much liked the flowy layered gown from the beauty queen challenge, which I think was Uli's? Can't recall.

In terms of a favorite character, so far I'd most like to have lunch with Bob, or perhaps deliacte lamb Vincent, who I fear is not long for the show. No one has so far inspired the kind of attachment I felt for original lamb Andrae, though.

And I was disappointed that Katheryn was cut last night, as she was the one I could most identify with - a short, one-of-the-boys, alt-ish sportswear girl, who would spend time way too much time making a hoodie for the dog. First, before starting the dress.
Posted by betsy at 10:48 AM No comments:

This is something I did - something that happened to me - several years ago, before I had a blog to spread it around with. It was the first of January, 2003.

Even at the time, I had to admit it was pretty hard leaving Baby Jesus in the dumpster.

It was my day off, of course, but I had made an arrangement to stop by the church where I work and unlock the doors for a recovery group, so that they could have their weekly meeting. (I thought that, if you were working hard not to get high anymore, New Years Eve and New Years Day could be pretty trying. So giving them a place to meet seemed little enough.)

Some friends of ours have a New Years open house every year, and Eric and I had been there for most of that afternoon. When we drove up to the church, of course the porch was swarming with the formerly chemically-dependant; when I walked up, the crowd parted.

On the cold porch, between the glass doors, was a fiberglass baby Jesus from an outdoor nativity. Someone had tattooed him with permanant marker - kind of a skeletal "KISS" look on one cheek, a pentagram on his forehead, a fairly nice tribal design on one leg, and anarchy A on his back. A random 666 - on the back of his arm, if I recall correctly.

The recovery people were just scandalized, deeply offended; I was not, particularly. It did seem a little creepy, but mostly just annoying.

(Or funny. I was a little embarrassed to let on, in front of the angry recovery people, but to me it seemed creative and kind of witty. I have a fairly high threshold for sacrelidge, suspecting, as I do, that God's big enough to handle a little grafitti.) I said that I felt bad for the church that the culprits had robbed - we just had a stray defaced Jesus, after all, but some church nearby had a manger with no baby, no focal point.

It was obvious to me that the best thing to do with Baby Jesus was dispose of him. I told the outraged people that, if they wanted, they could pray for the person who did this (since it's clear to me that this kind of creative energy and attention to detail could be put to better use.) I grabbed the Newborn King by the hard hand and swung around to face the dumpster.

He was pretty big - about the size of a 2-year-old, I would guess - and, marking pen aside, quite pristine, not chipped or cracked. It had clearly been Jesus' first Christmas. He was heavy, too; with his arms stretched up, just the way you'd picture, the easiest ways to carry him were on my hip, like a football, or hugged to my chest, like a baby. I cuddled him across the parking lot and laid him - not too carelessly, but not too carefully - in the empty dumpster.

We talked about it on the way back to the party. It seemed like such an evocative image - not symbolic or metaphorical, since it was hard to nail down exactly what the image would mean. I was glad Eric was with me - driving back though the foggy rain, alone with that image, might have been a little creepy.

I felt something different, though. Instead of creepy, I started feeling something harder to shrug off. I started to feel...tender.

Back at the party, I had a few party conversations, which all ended up being about the Baby. ("You just left it there? Really?") I had to admit to my mixed feelings, to feeling a little weird attachment to the fiberglass kid; I also realized that our maintenance man would find it there, and I thought the experience would be pretty upsetting for him.
I ended up telling the story to a roomful of people, and, after a couple more glasses of wine, my sister and I hatched the rescue mission plan.

By the time we got back to church - still Jan 1, but just barely - it was just drizzling, and the very biggest puddles had begun to drain away. We'd been singing in the car - worship music, an unusual choice for me and my sister - and we were singing
when I climbed into the dumpster.

Eric flipped open the top of the dumpster and took a picture of the babe, wrapped in swaddling clothes and lying in about 4 inches of freezing water. You'd be reaching up with both hands too. I hit my head climbing out with him.

Jesus was consigned to the trunk; my sister was deeply disturbed by his decorations. We tried a few different things to clean him, settling on nail polish remover and paper towels. I had dispaired of getting anything off him; C just wiped the 666 off his arm with a cotton ball, saying over and over "Look at that. Look at that. Look at that." We took on the blasphemous stuff first, and worked until we ran out of solvent. I was a little too enthusiastic, and wiped through the paint on his forehead, through the black marker and the peach paint to gray, as if his skull was showing. "That's right where his third eye chakkra would be," said my sister.

We wrapped him up in some mufflers and put on a Santa hat, and set him on the kitchen table. I wrote in my journal that I slept beautifully that night, and had every night since, with Baby Jesus in the kitchen. We decided to leave the knotwork tattoo on his leg and the Anarchy symbol on his ribs. I also wrote that I had no idea what we would do with him - perhaps advertise so that he could be reunited with his (fiberglass, Holy) family. "But I do feel attached to him", I wrote that March.

When I told Brian this story, he marveled. "You saved Jesus!"
I had shrugged. "Seems fair."
Posted by betsy at 10:49 PM 1 comment:

Obviously an honest mistake. Could happen to anyone.

There is nothing in life that I enjoy as much as a blooper. I'm sure this reveals my shallow turn of mind at least as much as my hair obsession, my Hello Kitty collection, or the stack of Vogues by my bed. Nonetheless:

inch all over
Originally uploaded by funky fat girl.
I cut off my bangs. Yes, on purpose.

My subtitle really should be 'art, craft, liturgy, theology, bitching and MY HAIR', since that seems to be the one topic in which my fascination never flags. (Age cannot wither, nor custom stale its infinite variety. At least to me.)

This was an interesting compositon when I saved it originally, the two ends (photos of my head with its new crop) in halftone, and my clippers and a wasted tuft in glorious Technicolor in the middle.

The colors got a little more, um, Techni, when I saved it as a psd and uploaded it to Flickr.

Wish list: ACTUAL PHOTOSHOP CS (not Elements, ad NOT LE for Lord's sake.)
Posted by betsy at 11:59 PM No comments:

It is entirely possible that you won't find this funny. (may be a just a Flickr thing, or maybe an arty thing.) I think it's BRILLIANT.
Posted by betsy at 10:13 AM No comments: 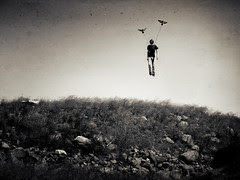 something still holds me
Originally uploaded by antimethod.
Please take a moment to look at these exceptional photos:

This one is was used for an album cover, so you may have seen it around - all kinds of people have been commenting 'Hey! Saw it at the Wal-Mart!' and "Hey! this was on Jimmy Kimmel!' Which I can imagine being both exciting and deeply unnerving.

Cole, incidentally, is a really nice person, and was very gracious about my slobbering fauning.
Posted by betsy at 11:15 PM No comments:

Benny Hinn can bite me

My husband just said that. I swear to you.
Posted by betsy at 7:26 PM No comments: