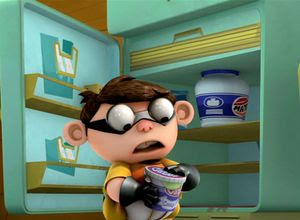 "I think that cheese might have died in that cottage."
I am obsessed with Fanboy and ChumChum.
Posted by betsy at 11:34 PM 1 comment:

Testing my mobile blogger. Did a 'yoga for beginners' dvd routine tonight. Used to pride myself on my flexibility. Um, not now. Maybe again, but not now.
Posted by betsy at 11:22 PM No comments:

Last night, I made the most awesome-smelling foodstuff I have ever made - a kind of garlic-basil pesto, which came about when I filled my mini-food-processor (YES I have 2 food processors. I got this little one, a cuisineart mini-prep, for making baby food; my brother gave me its big sister for Christmas a couple years ago.) Anyway, whiz up about 10 cloves of garlic, peeled, a big handful of basil leaves (I buy the fresh and keep them in the freezer). about a tablespoon of sea salt, about a teaspoon of peppercorns, and once all that dry stuff is chopped up, drizzle in 1-2 tablespoons of olive oil. It makes a thick, chunky pale green paste that smells better than any other food item I have ever made.

I made this to stuff into slits in a pork shoulder, before I unwrapped the pork shoulder and found that it was, um, had been in our fridge wayyy tooooo loooong. Geh! So now I have this little bowl of astounding yumminess and no meat to season with it. And...scene.

Well, tonight, after putting the adorable child to bed, I came down to the kitchen to hunt for some food. I was pleased to find some Brussels sprouts. Oh, how I love Brussels sprouts! And incidentally, that bag of sprouts had been in the fridge even longer than the pork shoulder had. But sprouts survive much better than The Other White Meat. Believe me.

So here's something really good to do with Brussels sprouts.

Wash and clear the gross-looking outer leaves from some sprouts - how much? Oh, I don't know, like 3 cups? Anyway, clean your sprouts, cut the stem ends off, and quarter each one.

Heat up a cast-iron skillet over high heat. Reduce the heat a bit (say from 10 to 8) and film the skillet with olive oil. Let that heat up for about a minute, and drop in a tablespoon or so of the chopped garlic stuff.

Stir it around, and drop in the sprouts. Leave them undisturbed for a minute or two, maybe pressing down on them with your spatula, to brown them. Stir, cook, press. Stir, cook, press. Once things are a showing a little brown, pour in a half-cup of water and cover the pan.

Stir occasionally. Cook until you can pierce the sprouts with a fork with a little effort. Remove the lid and keep cooking until the water evaporates. Sprinkle with a little salt and a little grated Parmesan.

I wouldn't even know I liked Brussels sprouts if not for Heidi Swanson's Golden Crusted Brussels Sprouts recipe on 101 Cookbooks. I love the photography on her site, and every recipe I've ever tried from it has been great.
Posted by betsy at 11:10 PM 1 comment:

expect an upswing in blog posts

in volume, if not quality.

I am giving up knitting for lent.

I know, it's unbelievable, isn't it? Recently I have been rather productive in the knitting area - mittens, hats, a nice triangular shawl...but also a little obsessive. The other night, I was blasting away on row after row, and it was gorgeous and fast and worthwhile and not fiddley at all, and it occurred to me that if I wanted a challenging practice, I could give up knitting for Lent.

I laughed out loud when I thought that, but I also had kind of a sinking feeling. I have begun to suspect that maybe I think/read/sketch/work on my knitting a little too much, maybe at the expense of other things...like attention to Eric and Ian. Like sometimes, my knitting is a way of disengaging. I don't see it as a terribly unhealthy way, and I think it's good to have interests that are just mine, involving neither work nor Eric's work nor The Backyadigans.

But I'm giving up knitting for 40 days for the same reason I gave up blogging last year - because I love it, because I already miss it...in fact it feels a little tragic (melodramatic? Moi?) and I feel a little nervous, like whatever will I do with myself? Or like I'm putting a beloved pet in a kennel for a month. I've been feeling wistful ever since I decided.

(Why, yes, I am a very unusual person. How nice of you to notice.)

Anyway, before I go to bed tonight, I'm actually going to stash my stash in the sewing room. I usually keep a couple of projects, in baskets and cache pots, out where I can admire them, or pick them up and work a few rows while plastic dinosaurs maraud around the carpet. Tonight at the library, I intentionally didn't take out or renew any pattern books. 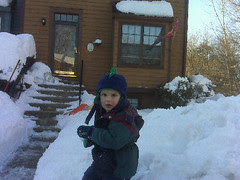 IMG00195.jpg
Originally uploaded by funky fat girl
Posted by betsy at 9:48 AM No comments: