So there's this guy, right?
He takes pictures.
They are not precisely what they seem.
The guy isn't either, precisely.
http://www.nytimes.com/2011/04/07/garden/07marwencol.html
In short - talented reprobate is assaulted, beaten nearly to death, lies in a coma for 9 days. When he wakes up, brain-injured, his drawing talent is gone, as well as his memory, his identity, and his addiction. Just one aspect of his old personality persists.
And this is what is grown up in its place.
This is by far the most interesting thing I have read in....maybe forever. PLEASE check it out.
Posted by betsy at 5:24 PM No comments:

And this one year, at puppet camp.... 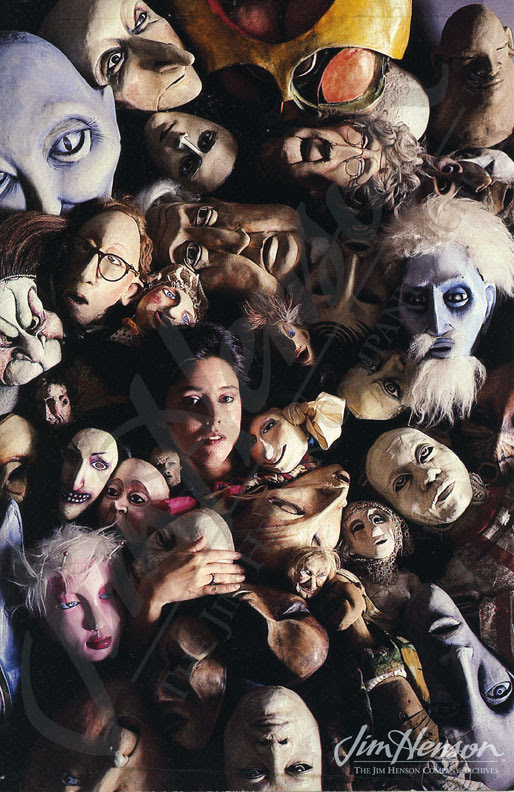 Inspired by this TED talk, I decided to initiate a new Twitter feed focused on my summer job - puppetry. No, I am not kidding.
I'm the Director of Puppetry Arts for Mystery Academy. It's a company run by our friend Chris Bowers and my husband (Nepotism! YESSSSSSSSS. ) that creates content and teaches magic, circus arts and puppetry in camps and schools. They've been at it for several years - last summer was my first summer.
My very first paying job, when I was a teenager, was as a puppeteer. Years have passed, and I've followed the astonishing work of people like Julie Taymor (who was producing off-broadway avant garde puppet plays in the late 70s, about the same time I was flailing my arms wildly to novelty tunes played on a reel-to-reel tape player.)
Several years ago, I saw a beautiful exhibit of some of her creations at the National Museum of Women in the Arts...and I started to wonder. What if I had known that it was possible to make a living as a puppeteer? Obviously, people do. Okay, not many people, but a few. What if I had considered that as a real career, not just a pocket-change venture when I was a teen?
For one thing, I decided, I would have a much different relationship with my own body. I would be more athletic - partly naturally, from the work itself, and partly through training. I'd certainly have well-developed upper-body strength. And probably be fairly graceful. More integrated, I think. How would a professional puppeteer walk, I wondered? What would she wear?
(Obviously: black turtlenecks, beat-up jeans, bare feet. Suede boots when footwear was required. Earrings, and perhaps a nose piercing, to make up for the lack of rings and bracelets.)
And if my mind and body were better integrated - if I hadn't spent all those years thinking that my body was nothing but trouble, longing to be a brain in a jar - what would that mean for my relationships with people?
Plus, I'd be a full-time artist, designing and performing. (With maybe a little food service or hotel front-desk work on the side.) I'd be around other creative people all the time. There'd be a certain amount of whimsy in my work life, plus a decent slug of humor, both tender and bawdy. Lots of late nights. A modicum of couch-surfing. A good bit of cheap wine. Some grant-grubbing, which I would be great at because I'm so charming.
Sounded okay.
So that was the road not taken, one of many, and. good Lord, couldn't we use up what's left of our lives pondering the stuff we didn't do in the part that's already been? Romances we turned our backs on? Jobs we didn't get or turned down?
In that way, being the director of puppetry arts is a circle, a link with my past.
And there's another way.
In 1984, I had one of my life's true epic fails. I was a camp counselor, and I failed at it. Miserably. Historically.
When I was a girl, I went to Girl Scout camp every summer for many, many years. I imagined that I would grow up to be a camp counselor, maybe even a camp director, camp was such a natural and good part of my life.
When I was a college senior, and needed a job, I got a position at a girl's camp in Maryland. Being older than many of my fellow counselors, I was given older girls - 13-14 year olds, their last year of being campers. Some would be CITs the next year, but most would never be back.
It was awful.
I was sure that I would be spending the summer molding young feminist minds, helping some dear girls reach their full potential, raising their consciousness.
As you have undoubtedly figured out, these girls did not want their minds molded or their consciousnesses raised. Or otherwise interfered with. They wanted to play cassettes of "Purple Rain" and "Rio" and complain about things and NOT go swimming....you know. They wanted to be 13-year-old girls.
Apparently, I had forgotten about being a 13-year-old girl.
It was a bad match. My co-counselor, who did know about being a 13-year-old girl, was disgusted with me and had me, in effect, fired.
Except of course they couldn't fire me. So many of the other drama department staff had washed out (gotten mono, gotten fired, quit in the middle of the summer, left for the arts and crafts department) that I was actually needed as a teacher. They took me out of the cabin, moved me into staff housing (IT WAS LIKE DYING AND GOING TO HEAVEN) and had me teach double day-parts and take shifts manning the camp office instead of supervising cabin life.
So it was actually great. Plus I met one of my dearest friends, with whom I lived for many years.
Except I was a failure.
That failure has stung me for literally decades. I have shied away from teaching kids at church, volunteering with middle and high schoolers, because I was convinced that I just didn't have anything to offer kids.
But last summer, having way too much vacation accrued and way too little money, I decided to take on the puppet thing. Wrote curriculum. Designed projects. Gathered materials and books and dvds (Muppets! Giant agitprop puppets in the streets of Cambridge!)
and it was one of the best, most energizing, most rewarding things I've ever done.
So now, in effect, I am two things that I could have been but wasn't. I'm a puppeteer. And I'm a fucking great camp counselor.
And now I'm @PuppetGoddess.
Posted by betsy at 12:06 AM No comments: