we should just quit now while we're ahead.

Dinner Tonight: beans and cornbread in the crock pot 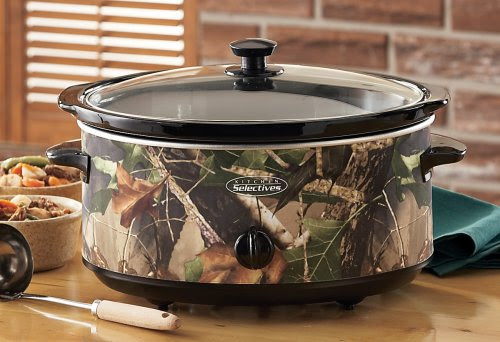 So we have this great crock pot, right? Actually, we have 2; for years, we've had a 1970 harvest gold one that belonged to Eric's family, and it still works fine.

But more recently, a friend of mine was upgrading to a more technical crock, and he gave me his excellent cooker. It looks like this:

(Well, said another friend, if you're ever called upon to make curry in a duck blind, or a tree stand, you're totally ready. )

Anyway, I made some really good beans tonight, and I wanted to tell you how to make them. I based them on a recipe in a magazine, and they're quite related to this recipe, but of course I had to do my own thing.

Place in slow cooker:
2 vidalia onions, sliced thin
2 peppers (I had a red and a yellow), sliced thin
Open a large can of beans (mine were Goya pink beans, 19+ oz) and rinse them really well, God only knows what that stuff in the can is. Add the beans to the pot.
Season with: 1 teaspoon cumin,
3 Tablespoons hot sauce,
as much leftover salsa as you have sitting around in jars in the back of the fridge,
frozen corn kernels (up to a whole bag),
2 Tablespoons brown sugar. Stir everything together and cook on low for 4-6 hours (or more.)

When you get home, check on the beans. Taste to adjust the seasonings - I added a splatter of ketchup and a small can of black beans. I also threw in a couple handfuls of greens. Stir. Turn the cooker up to high.

Now, mix up a batch of cornbread batter. I used Betty Crocker mix, which I picked because it didn't have trans fats.

While the batter thickens, sprinkle some shredded cheese on top of the beans. Then pour the batter on top of everything, spread it around, and cover the cooker. Cook on high until the cornbread bakes - it won't get fluffy, more like spoon bread than baked or skillet-ed cornbread - but it will solidify so that a knife poked into the center will come out mostly clean.

Not a low calorie meal, but meatless and very very satisfying. We loved it. I don't think I would have missed the cheese if I had skipped it, so no cheese next time.
Posted by betsy at 10:57 PM No comments:

2. One of my goddaughters has announced that, as regards the Twilight Saga, she is "Team Guy Who Tried To Run Over Bella With His Car." I say, go Maeghan.

3. I think "Your Baby Can Read" products would more honestly be called "YOUR Baby Can't Read, because of your cheapass Parenting FAIL, so SEND US MONEY resistance is futile give the fuck up already." To which I reply: Never!

5. Ian ran into the kitchen this morning as Eric and I were having lunch.
Ian: Can I have the fighting, attacking Zhu Zhu Pets?
Me: Like the battling armored Kung Zhu hamsters?
Ian: YEAH!!
Eric: Maybe.
Me: Yeah, we'll see.
Ian: I want the one that's part of an angry mob.
Me: Pardon me?
Ian: The angry mob one. It has a pitchfork.

EDITED AT ADD: Incidentally, taking a big plastic cup of shiraz to the playground = WIN.
Posted by betsy at 8:13 PM 1 comment:

Ian: When i close my eyes, all I can see is the dark.

Me: yep, that's to be expected.

Mumford and Sons - Roll Away Your Stone