Awesome Dinner for a cooler evening: Pot Roast and squash 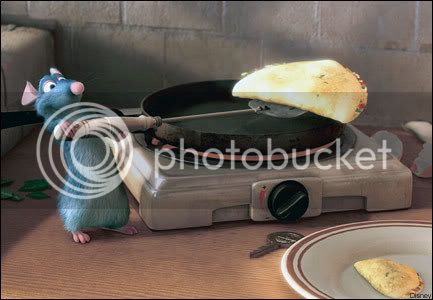 Heat a cast-iron dutch over on the stovetop.
When it's hot, drop is some olive oil and some butter. (It will sizzle. You will wonder if it is possible to fry butter.)
Use that to brown a big chunk of london broil; you can salt and pepper it while you brown it.
Once it's pretty crusty on all sides, pour in a half a bottle of sweet beer (I used Blue Moon, which I have in the fridge because it takes me 8 months to drink 6 beers.) Quarter an onion or two (mine were Vidalias) and drop them in, cover the pan and stuff it in the oven for an hour.

During the hour (no hurry) slice up some yellow squash - no need to peel, just trim off the ends - and some zucchini - I peeled some strips and left some, and discarded the ends of this too.

Overlap the little rounds in a layer in a buttered glass pie pan. (If you have recently watched Ratitouille, you'll know exactly what I mean.) Sprinkle with fine bread crumbs and Parmesan cheese. Repeat layers until you run out of room, or squash. End with cheese.

Beat 2 eggs with some milk - 2 generous splashes - and some melted butter. Pour this custard mixture slowly and gently over the squash layers, not disturbing the arrangement but giving it time to flow into the air spaces between the vegetables and soak into the bread crumbs.

When the one-hour buzzer goes off, lower the oven temp to 350, and slide the pie pan onto the center rack of the oven. Open the dutch oven and throw in some potatoes. Cover it, return it to the oven, and set the timer for another hour.

At the end of the second hour: The squash casserole should be bubbly on the edges, just barely puffy in the middle, and the cheese will be crispy brown. If you were to stab this with a fork, there would still be a little tender resistance from the squash slices. Ahhhh, that's the stuff.

Take the dutch oven out, place it on the stovetop, and turn the burner on high. Fish out the beef and the potatoes, and set them aside. Pour in the rest of the beer, deglaze the pan, and reduce it, to make a glazey/gravy-ish fluid. Some things you might add to taste:
salt and pepper
garlic powder
Worcestershire sauce
soy sauce
hot chili sauce

or maybe one or two drops of fish sauce.

No kidding. This stuff - and I have the nastiest, most super-American supermarket version - made of anchovies, smells like rot and tastes a little like...I don't know, caramel Parmesan soy sauce? Something thoroughly disgusting and yet kind of intriguing. Lick a little off your finger, in other words, and right after you say 'ewwww' you find yourself thinking 'hmmm....'

(Here's the surprising sort of thing you can learn on the web: foodblogger Andrea Nguyen conducted a fish sauce taste-off (!!) over at Viet World Kitchen!)

Anyway, I could swear (though I can find no proof) that I heard my heroine recommend this on her radio show as a way to make gravy more delicious, with depth and meaty umami-ness....

And she's right. This was insipid before the fish sauce, and awesome afterward. I recommend.

No more than a couple of drops, though. And don't leave the cap off for long.

Anyway; once you're happy with the flavor of the gravy, slide or shred the meat (mine came out dry, though not overcooked) and stir it in. Serve the meat on top of the potatoes; serve the squash side dish in triangular slices, like pie.

Serve on the back porch, under the Christmas lights, with a crying toddler reclining between your knees.
Posted by betsy at 9:11 PM