'Tis the season, I confess, when I climb the radio dial from my usual favorites (AMU, PFW, RNR) and head up to the Easy Listening end of things. Yes, "WASHFM, home of your" absolutely horrifing "lite n' easy favorites"......plays Christmas music, nothing but Christmas music. from now until midnight on the 25th. And that's what I'm listening to.

Yeah, occasionally there's a tidbit that sends me lungeing for the switch. Today it was Rod Stewart injuring O Holy Night....but to be fair, all Rod Stewart songs send me lungeing, except Hot Legs. There's some terrible, terrible new version of So This is Christmas, sung by (I can only imagine) some American Idol person, which should never be played anywhere under any circumstances.

But I love Cydni Lauper and the ReAnimated Corpse of Frank Sinatra, singing a duet about Santa. I love any version of Baby It's Cold Outside, even if it's not David Johannsen. Of course there's way too much Mariah, but you occasionally get to hear something really great, like Ella or Etta. Or even Mel.

Plus they play the Porky Pig song, (which I find is not actually Mel Blanc at all but some small-market DJ) singing Blue Christmas in character and you can hear someone, presumably the recording engineer, laughing himself senseless in the background.

And they play Snoopy's Christmas. 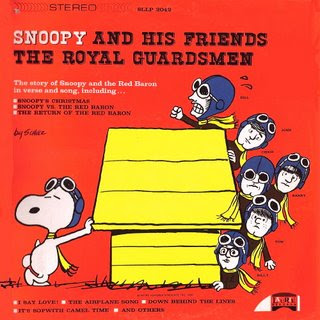 They played it Saturday afternoon, when we were in the car. From the moment that I heard the first fakey sound-effects-record explosions, I was a goner.

"Mommy, is that song making you sad?" asked Ian from his car seat.

BECAUSE I WAS CRYING.

Because of Snoopy. Because this record came out when I was 5. Because I have heard it so many, many hundreds of times, and the record itself - not just the lyrics or the melody, not the weird random bass breakdown in the middle, but every pop and groove of the recording - is grooved into my brain. There is nothing sad about the song, nothing I can think of that I am longing for or missing that the song embodies. It doesn't bring some specific memory flooding back.

It's just that some things just hit you, like that little hard rubber hammer hitting you on the knee at the doctor's office. My brain has reflexes too, apparently. And nothing seems to slow them down.
Posted by betsy at 10:10 PM

Awww - if it makes you feel any better, I remember when Snoopy vs the Red Baron was a top hit - I was 14 and you were probably in diapers, LOL!
My favorite is the one where the Red Baron says to Snoopy, "Merry Christmas mein Friend"
That always puts me away!
Merry Christmas - it's hard to find that peace in the midst of this insane commercially weird time of year - and for those who work in the church, doubly difficult! My prayers are with you:)

It's just that some things just hit you, like that little hard rubber hammer hitting you on the knee at the doctor's office. My brain has reflexes too, apparently. And nothing seems to slow them down.

Sometimes you say thing things before I even realize I was just thinking them. But you say them so much better than I would ;) I love you, Bets.