Ladies and Gentlemen, please let me introduce my brother. 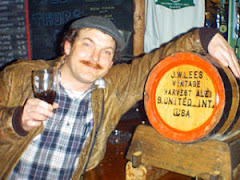 My brother, Sandy Mitchell, writes a blog: beerinbaltimore@blogspot.com He writes lots of other things too - magazine and newspaper articles, nonfiction books.

But his blog is notable this week because:
within two days, it was

1) nominated for a Mobby, the Baltimore Sun's award for Maryland's Outstanding Blogs

2) selected for a Best of Baltimore award by the Baltimore City Paper!

No matter how much you love beer, we promise you it's not as much as this guy. For the past year and a half, Alexander Mitchell IV has been keeping us entertained and informed with his Beer in Baltimore blog, a frequently updated collection of short thoughts on beer--more nuts, bolts, and flavor than philosophy--news postings, and links. Sure, he dotes on Max's a bit much, but that's to be expected, and more importantly, this is a guy that just doesn't stop thinking about beer. We guarantee you'll get a whole new appreciation for it, too.

It won for "Best Drinking Blog" in the Nightlife category.

I am very proud - I've been a City Paper devotee since my college days (OMG, that's almost 30 years!!) - so much so that I sought out the Balt City Paper even when I lived in suburban DC and worked in the district.

I know his blog is good, and now a few thousand other people will know too.


Incidentally, I too have been nominated for a Mobby. I have no illusions about winning - the list includes a bunch of blogs I read regularly, and they all do good work and deserve the award more - but it's an honor just to be nominated.