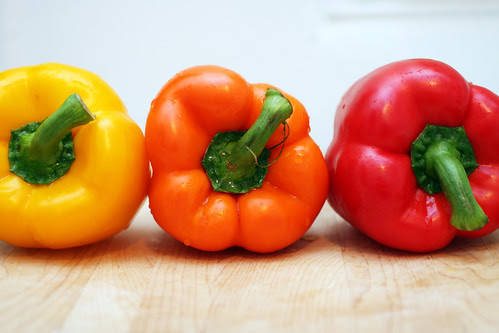 It doesn't seem quite fair to post this recipe, as it requires advance prep - I made the garlic-infused oil last week for another dish, and I decided to cook the wheat berries this afternoon without knowing what I would do with them. Nonetheless, here what I did -


Cook some wheat berries. (The way to cook wheat berries is to combine 1 part wheat and 3.5 parts water in a pot, bring to a boil, cover, lower the heat and simmer for an hour. I cooked a cup, because that's what I had left in the bag in the freezer.) Let them cool.

Open one can of black-eyed peas. (Hum chorus of 'tonight's gonna be a good night' here.) Drain, rinse, empty into a huge bowl. I used Goya, 15.5 oz.

Chop into small chunks half a cucumber, half a red pepper, and half a yellow pepper. Core and squeeze the seeds and runny stuff out of 2 small tomatoes, and chop those also. Throw all that stuff in the bowl with the beans and grain.

Now it's flavoring time. Chop up about 2 tablespoons of something spicy. I had a new jar of hot gardeniara, which is pickled vegetables -green beans, okra, carrots, celery and peppers - in olive oil. (This product makes an annual appearance at our house on the Thanksgiving relish tray, along with the olives and pickled watermelon rind.) Fresh or pickled peppers or probably some hot sauce would also be good. You need to mince them up really small, though, so they get disbursed through the grain and beans. Throw that into the bowl.

Now give it a couple shakes of that cheap balsamic vinegar.

I was about to give it a tiny splash of olive oil, but then I remembered! A week ago, I had poured a small container of olive oil, and thrown in a whole lot of chopped garlic, basil leaves, rosemary needles, the end of a jar of capers, and some peppercorns. I had spilled about half of it, the day I made it, and had used a bit on pasta, but found it underwhelming. However, it was great today! I do believe I will be keeping a small jar of that brewing at all times.

So throw in a couple spoonfuls of that, making sure to scoop up some garlic and capers and leaves.

Toss, adjust seasonings. Some raw sweet onion would also be good, if you have some handy. It'll need flaky salt and fresh pepper.

We ate ours with crackers and sardines, as I was in a sardiney mood after listening to today's The Splendid Table.

Adorable knitted sardines via The Daily Green
Posted by betsy at 8:10 PM