living in the past 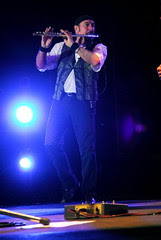 Jethro Tull_04
Originally uploaded by nikorimages
I am very sorry to have not taken this picture - we saw Tull on Monday night, a very good show after a very good Thai dinner in Rockville.

The boys played beautifully. I had quibbles (a few) with the staging and aesthetic choices, but the playing, the sound and the hall were all excellent.

Old Ian voice was quite grim for the first hour, and to the sound ops credit, it wasn't prettied up by processing. He was exerting tremendous effort to squeak out his vocals - up on his toes, tension visible in his arms and hands as well as his neck. A little subtle Joe Cocker action.

His voice warmed up quite a bit in the second hour. His flute playing was terrific, and he's massively energetic, never laying back for a moment. (Is it good, to be putting out so much, or bad, to be hogging the spotlight every second? Whatever - no one can accuse him of taking it easy, either way.) Martin Barr was exactly perfect, as always - a tiny bit antiseptic for my taste, but I can only imagine that Old Ian requires exceptional dependability from the rest of the band so he can show off.

I suspect he's kind of an ass, Old Ian.

We did not hang around to tell him we had named our son after him.

(Not exactly. But kind of.)

( Yes, I am serious. Ian is, in a roundabout way, named after Ian Anderson of Jethro Tull. It's actually a pretty good story. Short, too. )
Posted by betsy at 12:00 AM