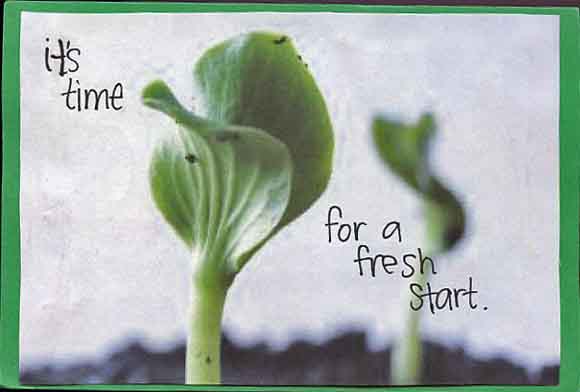 I preached today; Patsy, who was scheduled to preach and with whom I had been planning an unusual service, was sick and hoarse, and after a series of brief conversations yesterday, I agreed to write and present a sermon, along with the communion/contemplative/liturgical elements we had been working on.

Edited to add: It's up on the Cedar Ridge site. Click here and it's at the top of the page.

I've been joking about how stressful it is, but here's my super-secret confession in the relative anonymity of cyberwhatsis - it was fun. I liked doing it. Of course I was nervous, and of course I worked hard at it and worried about it. But I also really enjoyed it - both writing it, and speaking it.

Here's what made it easier -
1. My husband, who not only contributed ideas and advice but agreed to be interviewed as part of the message (the theme was fresh starts, and of course he's been immersed in a fresh start for the last 11 months, so it seemed sensible; plus he's funny; plus how great is it to be able to have someone standing beside you while you do this? Pretty great. Is the answer.)
2. Jack B, who took over all the booth stuff I am usually doing;
3. Harp 46, consummate professionals who basically did exactly what I asked them too perfectly
4. Tony, who, when I called, said (as he always does) 'just tell me what you need'.
plus Christie and Gail and all the other people who help all the time. Plus Jim, who did not kill me for double-booking him and another sound operator, but instead went out and bought me coffee. Plus, of course, Matthew and Patsy, who each thought of 12 different ways to say 'you'll do a good job."

My husband also added a special visual to the new years liturgy that I had concocted - people wrote down the stuff they were leaving behind, and I had planned a 'ceremony' where we would take those pieces of paper and remove them as we prayed. Eric, of course, had a more striking idea, and stood behind me. And as I prayed to have God transform our old lives into some something new and beautiful, Eric magically transformed the paper into sparking fluttering 'snow'.

AND THEN HE WENT AND GOT THE VACUUM AND VACUUMED IT UP BETWEEN SERVICES.

Excuse me, I have to go kiss his feet.

watching the snow fall was an inspiring sight for the musicians...

Missing CRCC terribly. Awfully. Artistic clash with new church and feeling lost and a little foolish for thinking they'd "get it." Meh :-P