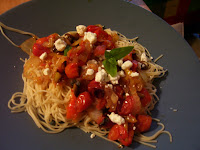 Chop some likely-looking vegetables - I had these in the fridge:
a pint of grape tomatoes, halved;
half a large Vidalia onion, sliced medium-thin;
some peppers (I used about half a red and half a yellow pepper) chopped;
and some white mushrooms, cut in large pieces.
Put them all (with their juices) into a baking pan (mine is 9x13 pyrex.)

Drop in a big spoonful of chopped garlic, and sprinkle generously with salt and pepper.
Douse the whole business with olive oil, and toss it all together, and chuck it in the oven.

Put a pot of water on for pasta.

After 10 or so minutes, the tomatoes and onions will start to get soft. Give it a stir.

After another 7 or so minutes, start the pasta. I used about 6 oz of multigrain Barilla.

The veggies are done when everything is soft and touches of brown have started to appear; the oil will be deep gold, mixed with the sticky juices that the vegetables have released. Stir, let sit for a moment while you drain and plate the pasta.

Great with or without cheese (Eric had grated parm; I had a little goat cheese, which was so lovely.
Posted by betsy at 9:05 PM

Sounds very fine to me!

Thanks for putting this up. It's been printed and will find its way into my recipe binder....

P.S. Not that there's anything wrong with that...I've prepared many excellent casseroles that looked like upchuck.