I posted this on Facebook, and the 'likes' seemed to be swarming, so I thought I would describe how I made it.

Preheat your oven to 400 degrees.

Into a large bowl, slice half a large white onion, about a cup of grape tomatoes, 2 cloves of garlic, half a gigantic red pepper, and whatever other leftover veg you have knocking around your fridge - I had about half a yellow squash. You can slice as thickly or thinly as you like - the thinner you slice, the sooner it will be ready. You don't have to slice the tomatoes much, though. Halving or just squishing them is fine.

Toss with a small splash of oil, either regular olive oil or flavored oil like that herby Basting Oil they were giving away at Wegman's last week. It's quite a nice thing to have around, incidentally. Sprinkle some salt in, toss to coat, and dump out onto a rimmed baking sheet. Spread out to make a mostly single layer (you don't have to be OCD about it.) Bake at 400 for about 20 minutes, and check it. You want the veggies to be soft, and some to have touches of brown but not entirely blackened. Mine took a total of 30 minutes. After the 20 minute check, put a pot of water on to boil. Once it boils, turn it down.

Now slide a whole 8 oz package of Rising Moon Organics Frozen Feta-Hazelnut Ravioli with Butternut Squash into the hot water. The package is covered with instructions that say Never cook ravioli in rapidly boiling water and Do not overcook! and I didn't, and you probably shouldn't either.

Immediately also drop in several big handfuls of cut kale. I bought mine in a bag at Trader Joes, and it was cut into about 1 inch pieces. So I recommend that size of bits if you have to cut your own.

The ravioli package directions say to cook for 8 minutes, and mine weren't quite as soft as one might hope, plus the kale was still really hard, so I let mine go a little longer - probably 10 minutes. Remove your veggies from the oven and put them back in the bowl they started in. Fish out your raviolis and kale and add them to the bowl. Toss everything together to spread the fabulous oil and veg juices around onto the pasta and kale. Plate. Eat. The kale is still a little crunchy after cooking for 10 minutes; the veggies are soft and carmelized, and the pasta is creamy/silky and absorbs the garlicy juices. Plus it's gorgeous. Plus it's 30 minutes.

My husband is constantly bugging me to 'write down that recipe!" Look, honey, I wrote it down. Go me. 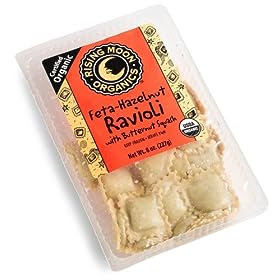