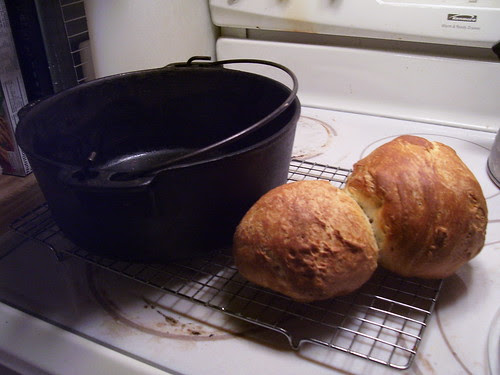 So I finally made some of this freakin' No Knead Bread that the entire bake-o-sphere has been on about for a year.

The backstory: Mark Bittman, my #1 favorite in the pantheon of favorite food writers, wrote about this idea in his column for the NYTimes Wednesday food section last November. Read it here. I must admit, I scoffed. That cannot work, I said.

But a whole lot of people got excited about this recipe, and this technique (if, in fact, leaving something in the fridge for a couple of days could be called a technique.) (And, as I consider my love of brined poultry, I guess it can.) Really, it has been the talk of the food-blogosphere.

I was looking something up on Jaden's Steamy Kitchen, which I love, and saw that she was pimping a technique that she said was even easier and resulted in a loaf that was even tastier - from a cookbook called Artisan Bread in 5 Min a Day. Seriously, who could resist that?

So on Saturday I whipped up a bowl of this dough. And tonight I baked some off. The third loaf is in the oven right now for another couple of minutes. We've eaten one small loaf - I had planned to have it with dinner, but it didn't get done in time, so now it's not dinner, it's just an experiment.

Here are the things I think I did wrong:
I may not have used enough salt.
I think I may have played with the dough too much.
I definately didn't give those first two loaves enough time to proof today between fridge and oven.

It was never spectacularly wet and sticky like the dough Bittman talks about - after just a little while on the counter, it was more springy and earloby, like regular bread dough after some turns in the KitchenAide.

The result:
The crust is really excellent. No complaints there. (The bread I bake normally is famous for its crust, but the famous crust is the product of a fairly fiddly process involving ice water, a pump-spray bottle, and way too many oven-door-openings for a house with a toddler in it. This is definately the best crust I have ever had without the insane fiddling.)

The crumb (the soft inside part) is soft, medium dense, uniform rather than bubbley or interestingly textured. I was disappointed in this, especially after seeing the gorgeous photos like this one:

She also raves about the flavor, and this is where the evidence lies that I have gone wrong somewhere. The flavor of my loaves is decent, but it's not great.

On the scale of bread flavor (0 being a white hoagie roll at Subway, decidedly far worse than Wonderbread, and 10 being Peter Rinhart's Brother Juniper slow-rise French Bread made at home - dude, this was a 4. That's me, being charitable. A charitable 4.

Ideas for next time:
I could always try FOLLOWING THE DIRECTIONS.
I could go with the Bittman/Sullivan Street recipe (which has no sugar)(which is where I think the flavor problem may lie.)

I have to say, though - I was wrong. This really is easy and fast, and it really does result in a loaf of bread with some seriously good characteristics.

Figures that I would start experimenting with this at the END of winter, doesn't it? You'll be able to spot our house this summer. It'll be the one that runs the air conditioning all day and night, with the tip jar on the porch.

And it'll smell awesome.
Posted by betsy at 8:50 PM

Hey, Boo. Try the version which calls for 3 cups of flour, 1/4 tsp instant yeast, 1 tsp salt, and 1 1/2 cup water. And make sure you let it sit out overnight. It looks absolutely grotesque the next morning, but tastes divine. I also barely handle it while I'm shaping the loaf.

I make this one all the time. It's a family favorite. ;)

I just this second mixed up a batch on that recipe. I'll give you a full report tomorrow night.