revgal friday 5 - beside the seaside

1. Ocean rocks, lake limps? Vice versa? Or "it's all beautiful in its own way"?
Really, seriously, lakes aren't the beach. Lakes don't have waves. Lakes are for canoeing. That's getting dangerously close to camping, in my opinion. A beach trip needs waves, a boardwalk, a photo booth, and a really expensive fancy restaurant that you can go into in a wet bathing suit.

2. Year round beach living: Heaven...or the Other Place?
I've always thought about it....you know, a place where you could get around town with an unlocked coaster bike, a place to write my novel on an old kitchen table on a screen porch stroll the dunes in a big Irish sweater. But honestly, I think I'd die of boredom. Or worse, take on some ill-considered business venture - opening a wine bar, a catering company, maybe a boutique. That way lies madness, and probably bankruptcy. Living in a major metropolis has ruined me for everyplace else, I think.

3. Any beach plans for this summer?
All my summer plans are up in the air. 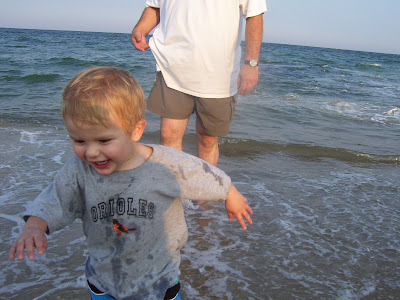 .....And, of course, it was emotional for me, seeing Ian take to it the way he did, and seeing Eric be such a dad. It made me think about how the beach has kind of 'been there for me', from babyhood through college and singlehood and wife-hood, and now with a beach baby of our own.

It's like a flipbook of snapshots - there's me and mom in matching sundresses at Avalon, there's dad throwing Sandy over the waves; there's me in my red white and blue racing suit in 1972; there's my mom after the stroke; me and Paul and Chuck; me and Dorney and Chuck and Larry..there are all the pictures of me that Eric has taken, holding up a rubber frog at Funland, shading my eyes by the jetty. There are even pictures from our pregnant trip, 2 years ago, when it rained the whole time and never got about 70. I'm obviously lost - huge, uncomfortable, already tired of waiting but mentally paralyzed, completely unable to think about what I'm waiting for. The rain pounded the dunes, and I stood out in it, shooting video of the whipping grass.

And now Ian, running in and out like a sandpiper, dropping handfuls of sand after the receding wave, showing the ocean who's boss.

5. Fantasy beach trip?
One that is open-ended?
One with a babysitter in tow?
Posted by betsy at 10:19 PM

Glad I came back to check on late posters -- I loved your verbal collage of beach memories.