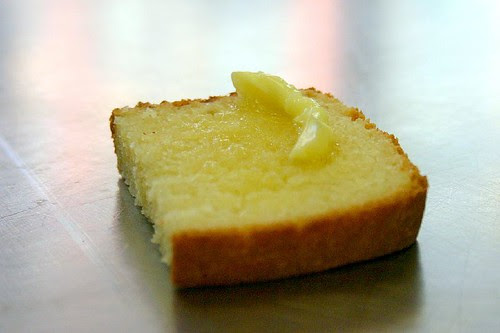 1. Orange Bread Barbados (or: Breakfast in Bread! Ha!)
from Al Dente -
I made a couple loaves of this before dinner - one for us, one for the neighbors who just had a baby. It's delicious - light, subtle, with a gorgeous fluffy texture inside and a crispy crust. (The recipe says it comes out "dense", which mine didn't, but I agree that it's "buttery, citrusy" and "fresh".)

I made it precisely per the recipe (!) but I think it would work fine with more zest, a little lemon juice and zest added in, some chopped dried cranberries or cherries, or even my current ingredient crush, mashed banana.

I think the subtlety might be due, in part, to the fact that I used low acid/no pulp orange juice.

But it's perfectly lovely, fast, and made of stuff we had lying around the kitchen. Hard to beat that. (That photo's not of mine, btw. It's from SmittenKitchen, where it illustrates a really good post about bread baking. Go read it.)

2. shrimp and spaghetti in coconut broth from June's Rachel Ray magazine
I didn't actually follow the recipe (because it make 3 meals worth and calls for FOUR POUNDS OF SHRIMP, are you kidding me?)
but instead improvised something similar with smaller quantities of everything. Well, not everything - cilantro does not cross our threshold under any circumstances, and I was sadly lacking fish sauce. But it was still good - fast, easy, delicious, pleasantly messy, and the shrimp did not have time to get rubbery (my pet peeve.) The broth is a lot like tom ka gai, which is my favorite soup and


Next time I make this, I will have that, and use less of this stuff:

because I think I have been abusing my husband with it.
(He's very nice about it.)


This, by the way, is both cooking and food blogging as procrastination. Sunday's sermon does not appear to be writing itself. As Paul says, others are merely amateur crastinors, but I am a pro.
Posted by betsy at 8:39 PM

I love that "stuff" and it is not available here