Hey, everybody, guess what? 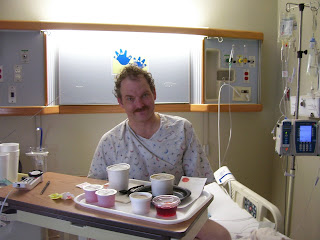 Hey look, everybody! It's my brother.

For those of you who are not on Facebook (and so are not reading my daily Tweet-length medical updates) my fucking brother has been in the fucking hospital for a fucking week. 7 days - and it's been different every day. Bad news - he's got pancreatitis. Oh, wait, it's actually good news - it's because of his gall bladder! We can take care of that! As soon as his pancreas calms down! We'll just hang around here while we wait for the pancreas to calm down.

Oh, wait - let's do something different to his gall bladder. But it's complicated, so let's move him to the good public hospital. (What? This wasn't the good hospital? Where's the good hospital? Oh, just down the street? Great, let's go to the GOOD hospital.)

Hmm, it looks like his gall bladder is better! By itself! So we don't have to do the complicated thing! Well, that's good - we'll just watch him for a couple days and then let him go. Oh, and let's give him food, and about time, since he hasn't eaten to speak of since last WEDNESDAY.

Hmmm, he's only a little better. What's that? Some sort of hole in the pancreas? That sounds serious. Fluid pooling in his abdomen? Running a fever? For 6 days? TEST TEST XRAYS MRI BLOODWORK TEST.

Also, you know that solid food thing? Forget that - what this man needs is a feeding tube. Lipids through the nose. That makes everyone feel better.

Oh, and by the way, he's in real pain, feeling like he's being punched in the middle all day long.

And did I mention? My brother is moderately hearing- and speech-impaired. Verbal communication with hospital staff ranges from excellently successful to seriously, WTF? So Jenny, his wife, is there all the time to facilitate communication. Eric or I visit nearly every other day and help out as best we can, and give Jenny a break.

This is confusing and stressful for me, and you can only imagine how worried Jenny and Sandy are.

So we made valentines.

with dinosaurs. Dinosaur Valentines FTW.
Posted by betsy at 11:07 PM

There are paws glomping my head. Seriously.